'They won't be able to do anything about this': McConnell revels in Barrett supreme court vote 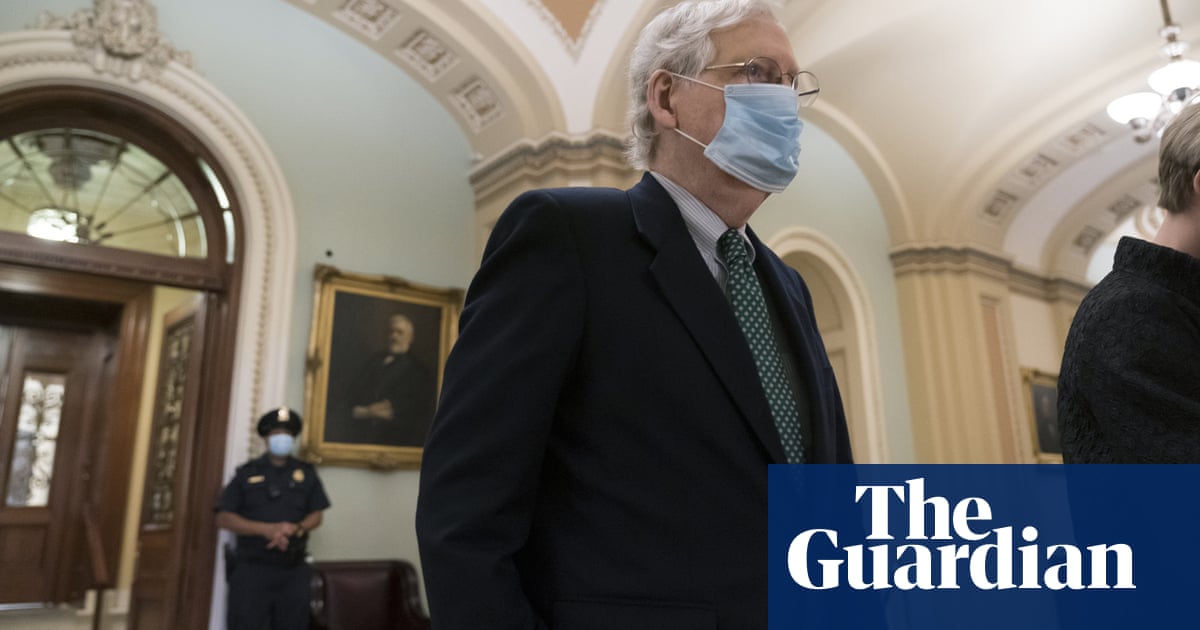 “By tomorrow night,” Mitch McConnell told Senate Republicans on Sunday, after they voted to limit debate and advance the nomination of Amy Coney Barrett, “we’ll have a new member of the United States supreme court.

“A lot of what we’ve done over the last four years will be undone sooner or later by the next election,” the majority leader said on the Senate floor. “They won’t be able to do much about this for a long time to come.”

The Republican was alluding to the possibility, largely backed by polling data, that Democrats will take back the White House and the Senate on 3 November.

Sunday’s vote moved the Senate closer to a final vote on Donald Trump’s third supreme court nominee, a little more than a week before the election. The confirmation vote is expected on Monday evening.

Two Republicans, Lisa Murkowski of Alaska and Susan Collins of Maine, opposed limiting debate. But Murkowski said on Saturday she intends to vote to confirm.

“I have no doubt about her capability to do the job and to do it well,” she said.

No nominee has ever been confirmed this close to an election. More than 58 million ballots have already been cast.

Democrats boycotted the committee vote on Thursday that advanced the nomination. Ahead of Monday night’s vote, they expressed concerns about the risks of contracting Covid-19, after several Republican staffers and members of Vice-President Mike Pence’s team tested positive. Senate minority leader Chuck Schumer urged Democrats not to congregate in the chamber and to cast their votes “quickly and from a safe distance”.

McConnell twice declined to answer questions about whether Pence would come to the chamber to preside on Monday. At a rally in Florida on Saturday, however, Pence said: “I wouldn’t miss that vote for the world.”

Schumer said Pence “reportedly intends to come”, and blasted him for being willing to put “the health of everyone who works in this building at risk”.

“It sets a terrible, terrible example to the American people,” the New York Democrat said. “The Republican party is willing to ignore the pandemic to rush this supreme court nomination forward.”

Brian Schatz, a senator for Hawaii, told a reporter: “It is clear to me that their closing message is that they’re going to personally deliver Covid to as many people as possible.”

Republicans did not appear concerned.

“We’ve done a very good job within the Senate to follow the guidelines as best we can and I think the vice-president will do the same,” said Mike Rounds of South Dakota, adding that Pence was “very responsible”.

On Sunday the White House said Pence did not have to follow federal guidelines and quarantine for 14 days because he was an essential worker. Pence continued campaigning.

With Barrett, the supreme court will have a 6-3 conservative majority that could last for years. In the short term, Barrett could weigh in on cases involving the election. Trump has said he believes the court will decide the election and has made clear he wants Barrett on the bench for any such cases.

Barrett is also likely to participate in oral arguments on 10 November, in which Trump and fellow Republicans are asking the court to strike down the Affordable Care Act, the health law known as Obamacare, in the middle of a pandemic which has infected 8.5m and killed 224,000.

A favourite of Christian conservatives, Barrett frustrated judiciary committee Democrats this month by sidestepping questions on abortion, presidential powers, climate change, voting rights, Obamacare and other issues. She has criticized rulings upholding Obamacare but said during her confirmation she has no agenda to invalidate the measure.

Democrats are considering structural reform to the Senate and the court, should they win back control. Republicans claim such reforms, including expansion of the court, would be dangerous.

Barrett, 48, has been a federal appeals court judge since 2017 . Before that she was a legal scholar at the University of Notre Dame in Indiana. Trump touted her nomination at a campaign rally in New Hampshire on Sunday.