Silver Airways to offer non-stop flights starting at $89 from GSP to Orlando, Jacksonville and Tampa

Those looking to fly to Florida without breaking the bank will be in luck later this year.

Silver Airways is expected to announce three new routes from Greenville-Spartanburg International Airport (GSP) to Orlando (MCO), Jacksonville (JAX) and Tampa (TPA). All are nonstop and will be available twice a week, starting with routes to Orlando on March 18, routes to Jacksonville on March 19 and routes to Tampa on March 21.

A press conference at GSP is scheduled for Tuesday, January 19.

Rates start at $88.99 for a flight to Orlando. The airline has not yet stated if that rate will be consistent with flights to Jacksonville and Tampa as well.

Tickets are already available for sale on Silver Airways mobile website, although computer users will have to wait for the tickets to be available on the airline’s traditional desktop website. 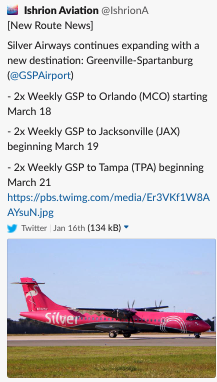 Passengers going to Orlando will fly onboard an ATR 72-600, while Jacksonville and Tampa flights will use the ATR 42-600.

Founded in 2010 with assets from the now-defunct Gulfstream International Airlines, Silver Airways is a regional airline serving the United States with headquarters in Fort Lauderdale, Florida. It has 18 airplanes in its fleet and serves 28 destinations.

The post Silver Airways to offer non-stop flights starting at $89 from GSP to Orlando, Jacksonville and Tampa appeared first on UPSTATE BUSINESS JOURNAL.