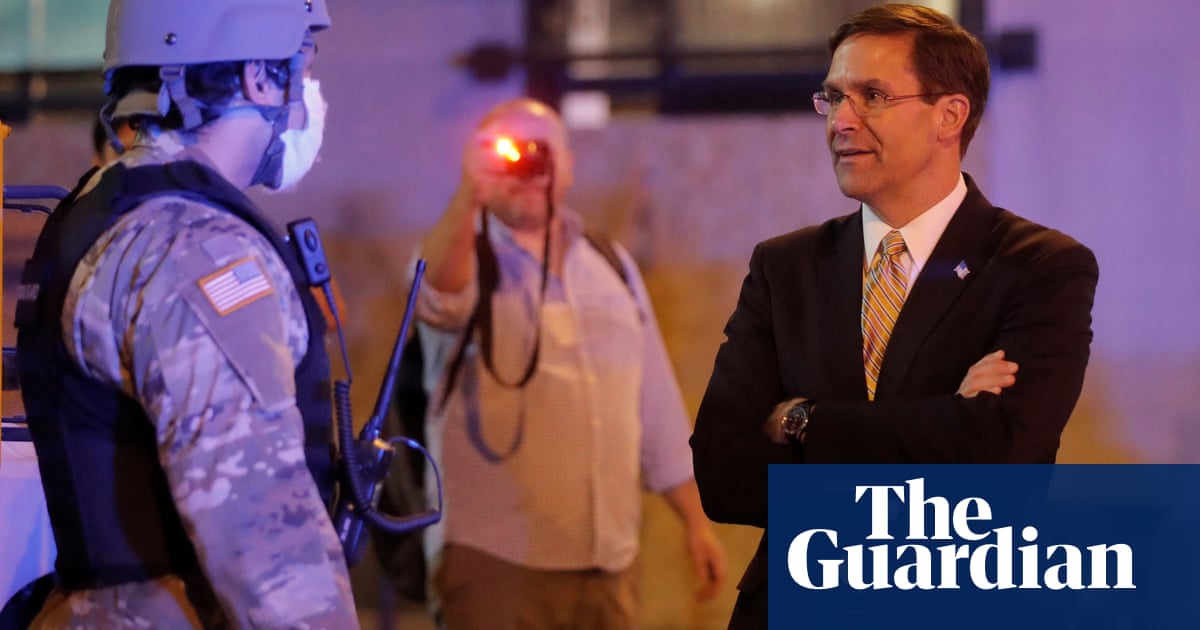 The US defence secretary has opposed Donald Trump’s threatened use of the Insurrection Act to allow active duty troops to be deployed in American cities,

Mark Esper was speaking to journalists in the Pentagon amid mounting disquiet about the increasingly militarized response to the George Floyd protests, and confusion over the role of the troops.

About 700 troops from the 82nd airborne division, mostly military police and combat engineers, were flown to bases around Washington on Monday night. The Associated Press reported that 200 would fly out on Wednesday, but then with a few hours that decision was reversed and the airborne troops stayed put in the bases on the outskirts of the capital.

Trump has threatened to invoke the 1807 Insurrection Act that would allow him to deploy troops on city streets, against the wishes of state and city authorities. The president said he would use the law if local authorities failed “to defend the life and property of their residents”.

“I say this not only as secretary of defence, but also as a former soldier, and a former member of the national guard, the option to use active-duty forces in a law enforcement role should only be used as a matter of last resort, and only in the most urgent and dire of situations,” the defence secretary said. “We are not in one of those situations now. I do not support invoking the Insurrection Act.”

Esper has been supportive of Trump and has avoided contradicting him until now. But there is reported to be mounting unease about senior officers about the politicisation of the armed forces, and concern over Esper’s own actions.

“Esper has directly challenged Trump,” Thomas Wright, director of the centre on the United States and Europe on the Brookings Institution, said on Twitter. “Trump hates being boxed in. If he fires Esper, it could set in motion a crisis that may lead to a wider revolt within the GOP.”

Esper was due in the White House to meet Trump straight after his Wednesday morning press briefing. It was not clear if Trump had ordered him to reverse his order on troops deployments around Washington.

She added that the press would hear if Trump lost confidence in him and noted: “The president has the sole authority to invoke the Insurrection Act.”

There has been widespread outrage – including from former officers – over the participation of Esper and the chairman of the joint chiefs of staff who were present at a photo op outside a church near the White House on Monday after the surrounding area had been cleared with gas canisters, mounted police and baton charges.

Esper’s participation provoked the resignation of a member of the defense science board, James Miller, who alleged the defence secretary had “visibly supported” the use of force.

Esper said he was not aware of the measures that had been taken to drive protesters out. He said he was under the impression that he and Milley would inspect damage in Lafayette Park, just in front of the White House and in St John’s Episcopal church, where there had been a fire in the basement.

“I was not aware a photo op was happening,” Esper said. “Of course, the president drags a large press pool along with him. And look, I do everything I can to try to stay apolitical and try and stay out of situations that may appear political and sometimes I’m successful with doing that, and sometimes I’m not as successful, but my aim is to keep the department out of politics, to stay apolitical.”

But Esper defended his call to state governors on Monday “to dominate the battlespace” in responding to protests over the police killing of George Floyd.

“The sooner that you mass and dominate the battlespace, the quicker this dissipates, and we can get back to the right normal,” Esper said on the call with Trump and the governors.

Speaking on Wednesday he said battlespace was “part of our military lexicon”.

“It’s what we routinely use to describe a bounded area of operations. It’s not a phrase focused on people, and certainly not on our fellow Americans,” Esper said.

But he added: “In retrospect I would use different wording, so as not to distract from the more important matters at hand.”

Esper also said he had asked the army secretary, Ryan McCarthy, to launch an inquiry into a national guard medevac helicopter which was filmed hovering low over protesters in Washington, in an apparent effort to disperse them.

Esper refused to be drawn in making an initial assessment but he did offer an alternative to the view that the helicopter was used for intimidation.

“I got a report back that they were asked by law enforcement to look at a checkpoint, a national guard checkpoint, to see if there were protesters around. So there’s conflicting reports.”