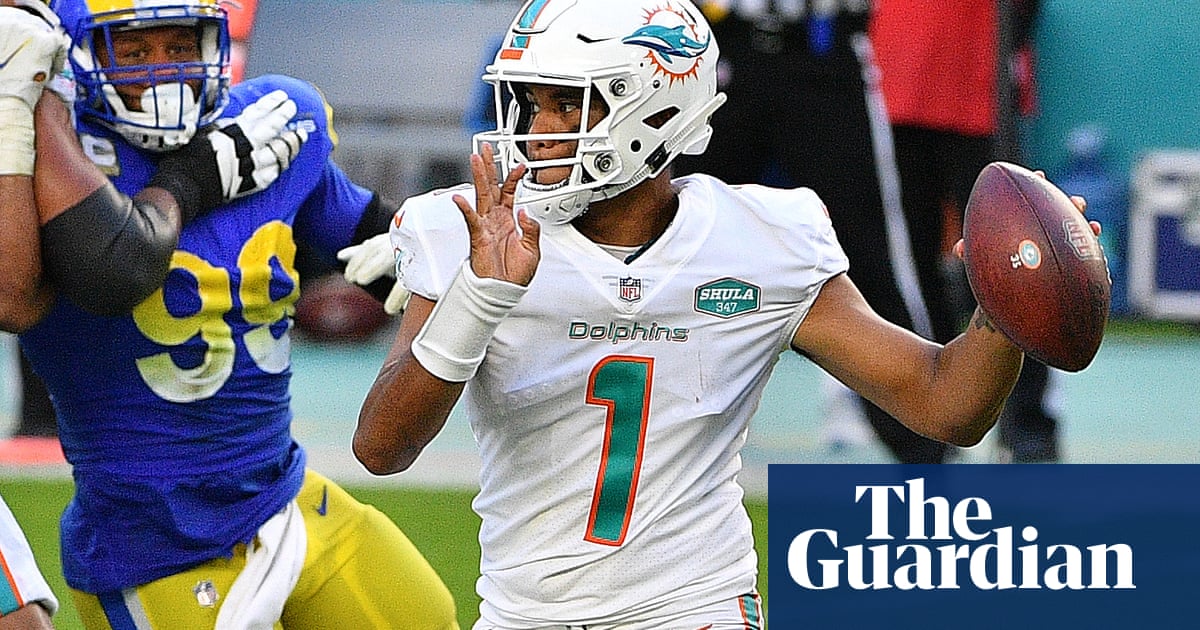 Everybody expected Tua Tagovailoa to be the Miami Dolphins’ starting quarterback but few had him playing that role so soon. The Dolphins had a plan in place that involved starting perennial place-holder Ryan Fitzpatrick, allowing Tagovailoa some time to adjust to the pros. The plan changed last week when the Dolphins decided that now was the time to install the Alabama product as the QB. It was a curious move given how well the Dolphins had played under Fitzpatrick, but one which makes sense when factoring in that Miami has a legitimate reason to think it will be making a return trip to the postseason.

If there was one person who was particularly blindsided by Miami’s decision, it was Fitzpatrick, who was in the midst of one of his trademark stretches of tantalizingly great football that he’s capable of conjuring. It was easy to understand why the 37-year-old journeyman was upset, as this was not a situation where the Dolphins necessarily needed to make a change at quarterback. Before today’s games, the spin was that the Dolphins have first- and second-round picks in next year’s draft courtesy of the Houston Texans and want to know what they have with Tagovailoa before they go out and possibly use one of those picks on a signal-caller.

So what do they have? Well, that’s still to be determined. Yes, the Dolphins defeated the Los Angeles Rams by a 28-17 score in Tagovailoa’s starting debut, but it was the epitome of a total team effort. In the game, the Dolphins managed to score a touchdown through the air, on the ground, on defense and on special teams. The last time that the Dolphins did all that in a game? That would be 1993, way back during the glory days of grunge. All eyes, obviously, were on the highly touted Tagovailoa, but his numbers won’t dazzle anybody. He went 12-for-22 for 93 yards with a single touchdown. He was credited for two carries, but zero total rushing yards. He did, as they say, enough for his team to win. Or not to lose.

The Dolphins have a passing, rushing, special teams and defensive TD today.

It’s the first time Miami has recorded all four of those types of touchdowns in a single game since Oct. 24, 1993 against the Colts. pic.twitter.com/sSsdttkuKO

This leads us to the other reason that the Dolphins are moving on from Fitzpatrick. While Fitzpatrick is known for playing impressive stretches of football, he is also well-known for regressing to the mean at the worst possible times. That wouldn’t be a problem for Miami if they continued to think of this as a bridge year, but the calculus may have changed in the last few weeks.

Sunday’s game between the New England Patriots and Buffalo Bills was billed as a potential “changing of the guard” contest. Coming off of a three-game losing streak, the Patriots struggled offensively and defensively against the Bills, who are currently the top seed in the AFC East. While the Patriots managed to put themselves in a position to tie or win the game late, it was all undone by a last-minute fumble by quarterback Cam Newton, whose time in New England may have already be coming to an end. With the 24-21 win, the Bills improved their record to 6-2 while the Patriots have sunk to a previously inconceivable 2-5.

For the longest time, the AFC East has essentially been the Patriots’ birthright. The last time they failed to win it was in 2008, when Tom Brady suffered a season-ending injury in Week 1 one and they lost a tiebreaker to – who else? – the Dolphins.

Miami have only made the postseason once since then (a blink-and-you’d-miss-it appearance in 2016), but now, thanks to the Patriots’ struggles and the absolute dumpster fire that is the New York Jets, they have to think that they’ve stumbled upon a golden opportunity to make a return trip. Maybe that’s why they decided to hit fast-forward straight to Tua time. There’s no need to build a bridge to the future when the future could already be here.

Video of the week

So it’s safe to say that wind was a bit of a factor in the Los Angeles Raiders-Cleveland Browns game. Raiders kicker Daniel Carlson looked like he was going to absolutely nail this field goal. Instead, a burst of wind rejected it like an NBA center. The end result? This weird, wobbly curveball of a kick that inexplicably hit the post. The Raiders still managed to put together a 16-6 victory so this Act of God ended up being a non-factor

That wasn’t the only kick affected by the weather. Gusts were also doing wonky things in Green Bay.

MVP of the week

Let’s go extremely inside the box here. Minnesota Vikings running back Dalvin Cook ended up scoring four touchdowns in the Vikings’ 28-22 win over the Packers. He ran in three of them, eventually rushing for a total of 163 yards, and also caught Kirk Cousins’ sole touchdown pass. The memorable hook here: all four TDs happened on Minnesota’s first four offensive possessions. How important is Cook to this team? Without him, the entire Vikings team combined to rush for 32 total yards against the Atlanta Falcons two weeks ago.

Quote of the week

Nobody really trusts Nick Foles. And yet the Chicago Bears quarterback has a way of succeeding when least expected. That’s how you get named as Super Bowl MVP after a season you were supposed to be spending as the Philadelphia Eagles’ backup. Aikman here was talking about how Foles helped rally the Bears into a late-game comeback against a New Orleans Saints team that looked to be in full control. During the last minutes of regulation, Foles went 12-for-15, converted two fourth downs and ultimately set up Cairo Santos’s game-tying field goal. (The wind cooperated, this time.) Unfortunately for the Bears, they faltered in overtime, losing 26-23.

Stat of the week

8. That’s the number of times Kansas City Chiefs quarterback Patrick Mahomes has scored at least three touchdowns in the first half of an NFL game. This feat should double as a tribute to both Mahomes, obviously, and the entire offense that Kansas City has built around him. (Oh, it’s also a tribute to the New York Jets, who are now 0-8 and halfway to an Imperfect Season.)

Elsewhere around the league

• The Russell Wilson MVP Watch continues. In the Seattle Seahawks’ 37-27 win over the San Francisco 49ers, he scored four touchdowns on 27-for-37 passing. What’s astounding about Wilson’s numbers is just how we’re used to him doing things like this seemingly every other game. We’ve grown accustomed to his greatness, which is too bad. If he does end up winning MVP, it will be party on merit, but also something of a Lifetime Achievement Award.

• One general rule of thumb is that when the Pittsburgh Steelers and Baltimore Ravens get together, you can usually expect a close, physical and dramatic game. Sunday’s was no different. Looking at the wrong side of a 28-24 score with the clock running down, the Ravens put themselves in a position to win the game at the end. In a fourth-down situation, quarterback Lamar Jackson had a shot for a game-winning touchdown. Instead, it was harmlessly flicked away by Minkah Fitzpatrick. Because of this, the undefeated Steelers have improved their record to 7-0. Meanwhile, Baltimore lost both the biannual grudge match and All-Pro left tackle Ronnie Stanley, who is out for the season with an ankle injury.

• There was, however, a successful game-winning touchdown play on Sunday and, wouldn’t you know it, it came against the Chargers. Apparently, neither relocation or moving on from Philip Rivers were sufficient enough moves for the franchise to change their identity as Fourth-Quarter Crumblers. This time around it was Drew Lock who fired the dagger in the game’s closing seconds to make this a 31-30 Denver Broncos victory.

• The typically entertaining Dallas Cowboys-Philadelphia Eagles rivalry game certainly looked like a fantastic matchup on paper before the season, so it made all sense in the world for the NFL to schedule it for a prime time Sunday Night Football broadcast. Unfortunately for them, the Cowboys lost Dak Prescott a few weeks ago and the Eagles have just looked lost. Heading into this matchup, the two teams had combined to win a grand total of four games. Somehow, it was even more dreadful than anticipated with the Eagles winning 23-9 (mostly because someone had to) and taking control of an NFC East which could end up being the worst division in NFL history.