“There’s no way to socially distance in a strip club”: A dancer on working through the pandemic 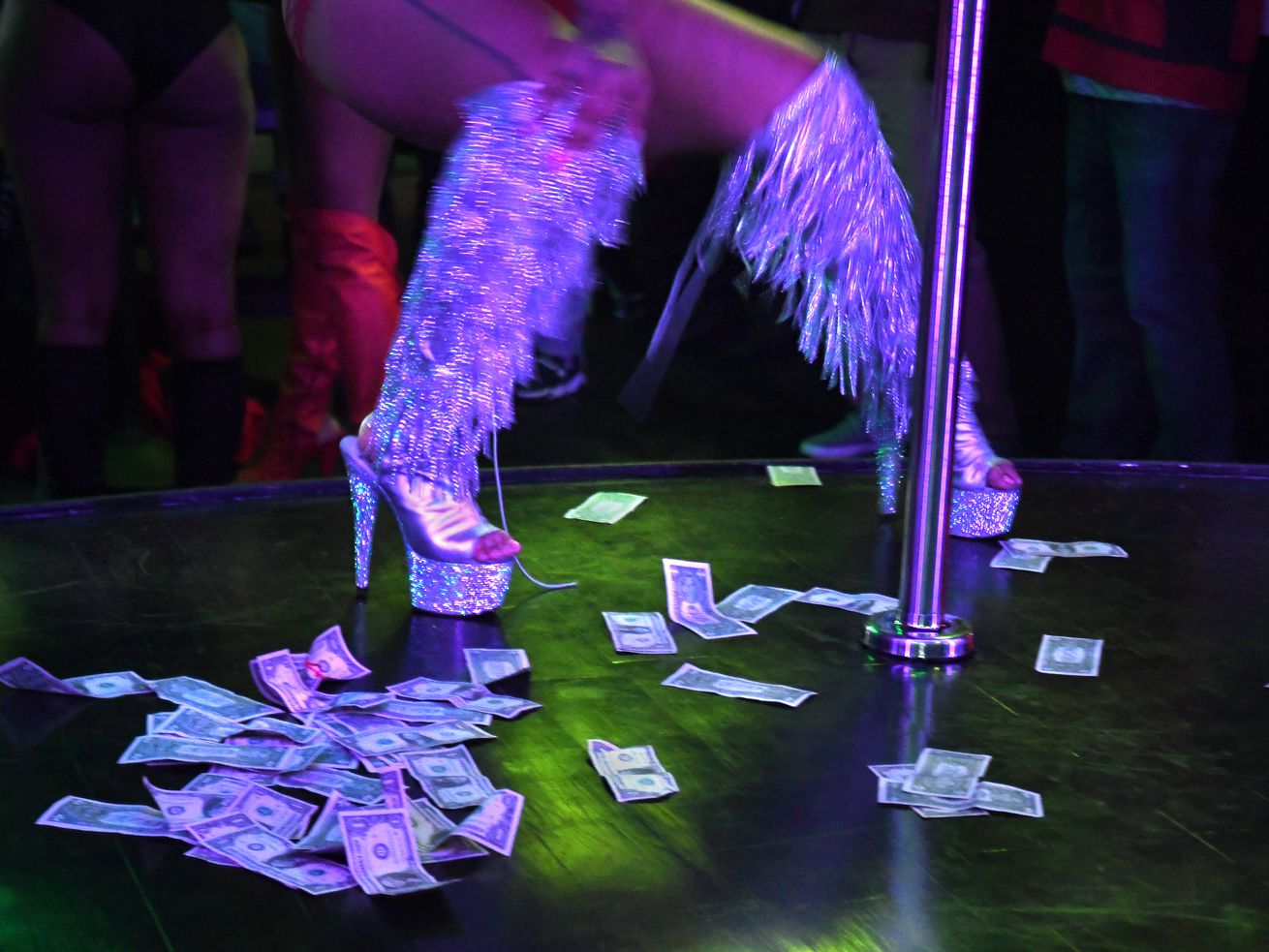 Dancing in a mask, and other coronavirus concerns.

Masks are a mandatory accessory for all customers and workers, which decimates the strategic smiles strippers use to suss out potential clients. The traditional cavalcade of loud, spendy men — enjoying a Friday happy hour before heading home for the weekend — have disappeared. Today, she’s lucky if she spots a party of three. Backstage, a culture of anxiety grips the talent. The dancers are fearful of catching Covid-19, sure, but more than that, the difficulty of making good tips during a pandemic has become abundantly clear.

That hasn’t stopped Diana, who is 24 and of Pakistani descent, and spoke on condition of anonymity to protect her employment, from trying. She’s still gearing up for evenings at the club — mask on, baby wipes in tow — for the dwindling crowds willing to risk it all for a night on the town. She lives in Houston, Texas, a city famous for its strip joints, and as of early May, she was given the green light to return to the stage. Texas has become a new hot spot for America’s ongoing coronavirus epidemic due to the state’s questionable reopening strategy, but Diana tells me that her club has been more or less open, barring a few false starts, since the state ended its stay-at-home order. She can work whenever she wants.

Despite that freedom, Diana tells me she typically only heads to her club when she knows one of her regulars is at the bar. Dancing for a mostly empty room, for a mostly stingy clientele, is about as depressing as it is economically inefficient. We talked about that, as well as how she’s tried to match her mask to a belly-dancer look, and the cognitive dissonance of social distancing during a lap dance.

So when did you first get the call that the club was shutting down?

We were all prepared for it in April. There were already a lot of rumors going around, but you didn’t want to bring it up because nobody wants that to happen. Houston is one of the strip club capitals of the world, so culturally here it’s a big deal. I wasn’t surprised when I got the news. During lockdown, or shelter in place, the managers made a Facebook group to keep us updated. We had a group chat and everything. But we’ve been open since everything reopened [in May].

How worried were you financially during that time?

“I think every girl at my club has an OnlyFans now”

I’m in a spot of privilege because I know I can always go to my parents for money if I really need it. But I’m friends with a lot of girls at work. Most of them are single mothers, or are supporting multiple people, or their families, and everyone was really stressed out. A lot of them ended up hanging out with regulars outside of the club to make ends meet. That’s how everyone made it work at that time. Everyone joined online moneymaking ventures at once. I think every girl at my club has an OnlyFans now.

How much money are you making now versus before the pandemic?

Pre-pandemic, my average weekend night was $2,000 to $3,000, and weekday was at minimum $1,000. Now I make at best $1,000 on any night, and that’s because of my regulars at my club. The cash flow is not onstage at all anymore, or just from dances; it’s exclusively doing VIP. There’s less small money on the floor.

When you got the call that you could go back to the club, were you hesitant at all? How did you weigh the pros and cons?

They told us that they were going to enforce masks on everything, but when I went in the first time, when Texas entered stage two, it wasn’t really enforced. I definitely worked less. It became a bizarro world after the first week. Once you were in there, you could forget what was going on outside, which I suppose was always the point with strip clubs. It was amplified during a pandemic.

“I had a customer, when we first opened up, who got mad at me for wearing a mask”

There’s a lot of anxieties when I go in. Like, “Do I really want to do this?” But once you’re in, you’re in the zone to make money. It’s especially hard when your customers don’t believe in coronavirus. Most of my customers are Covid-denial people. I had a customer, when we first opened up, who got mad at me for wearing a mask. I was like, “I’m wearing this for you, you’re old!”

I work less on a whim now. Before, it’d be any night I could make money if I really wanted to. But now I only go in if I know one of my regulars is there.

What’s it been like to dance in a mask?

It’s kinda weird, because how you judge if someone likes you is by smiling at them. So the way to signal is more oriented around body language. Our managers are more strict now. You can’t accept tips from guys who aren’t wearing a mask. Which is good, but it’s changed the way you communicate with people. There’s a lot of hand gestures. Dancing in a mask is much more physically exhausting, too. Now that I’ve worked for a while in one, I get so sweaty, and you get so lightheaded from your breath being trapped.

Do you have a mask that is incorporated into your gear?

I sewed my own mask. It has a filter in it. I play on the exoticism thing, so my mask is a gold chain-mail mask. It looks like that belly-dancing thing. I’ve definitely been able to incorporate it. Nobody is using a hospital mask. The girls are wearing cute masks. A lot of silk. You can tell that we’re sewing these out of old clothes and stuff.

Has the clientele at the club been different?

It’s a completely different experience. It feels very different. When you were in a strip club before, there was a general level of joy. And now that’s completely gone. Guys aren’t coming in with a big group of friends. Guys are coming in alone. Our clientele is usually a bunch of dudes just off work, because we are next to all the oil and gas companies, and are here for a happy hour. Now it’s mostly regulars, and people who are members of our VIP club — there are way less people who want to have fun and spend a lot of money. It’s guys who are a little more stingy, for sure.

Is that a bad vibe?

Yeah, it just feels very weird. It’s almost a “don’t ask, don’t tell” thing. Nobody brings up the pandemic, because nobody wants to acknowledge that it’s happening.

“There’s no way to socially distance in a strip club”

Yeah, lap dances are allowed. There’s no way to socially distance in a strip club. You’re wearing a mask but I’m on your lap. I baby-wipe between customers, which I did before Covid, but now it’s a normal precaution rather than a weird thing that I did.

How scared are you and your coworkers of catching Covid-19?

For the most part, there are way less girls, and there are a lot of new girls coming from other cities that are still shut down to our club so they can work. For the most part, people are worried about their financial situation. There’s a rumor that three of our managers got it, but they’re not being clear with us. There’s a lot more anxiety. It reminds me of what older girls say the 2008 financial crisis was like.

What do you make of the shaming we’re seeing aimed at people who are out at the clubs right now?

This is our job, and just because our job is something sexual, we don’t get the benefit of the doubt that, like, servers get. There’s already a lot of stigma. There’s already a lot of danger in this job, so what’s the difference? I could already die on a normal night here. You never know. You can’t judge women for making these decisions, but we get treated and shamed the way that club-goers are right now. We have rent to pay. Just because we have a choice about when we go in doesn’t mean we have a choice about our bills.

Every day at Vox, we aim to answer your most important questions and provide you, and our audience around the world, with information that has the power to save lives. Our mission has never been more vital than it is in this moment: to empower you through understanding. Vox’s work is reaching more people than ever, but our distinctive brand of explanatory journalism takes resources — particularly during a pandemic and an economic downturn. Your financial contribution will not constitute a donation, but it will enable our staff to continue to offer free articles, videos, and podcasts at the quality and volume that this moment requires. Please consider making a contribution to Vox today.