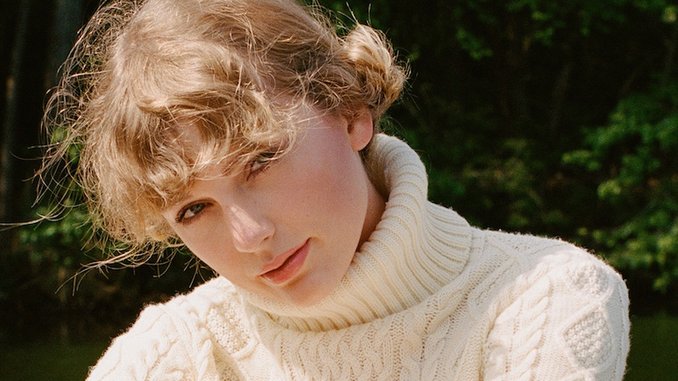 Taylor Swift surprised us yesterday morning by announcing her eighth studio album folklore would arrive today. The new album is here, and now that we’ve had a chance to give it a few proper listens, we have lots of thoughts and feelings. folklore, which features The National’s Aaron Dessner on production and songwriting and his brother Bryce on instrumentation, finds Swift strutting into bold new directions: dream pop, indie folk and soft rock. Lyrically, she’s as sharp as ever, so we decided to list some of the most vivid lines from folklore for you here. This list is best enjoyed while wearing a cardigan and sipping on a mug of tea near a window where rain is falling softly outside.

Album opener “the 1” has too many great one-liners to count, but I’ll share a few of them anyways. My jaw quite literally dropped, and I blinked my eyes 28 times when Swift began the song with “I’m doing good, I’m on some new shit / Been saying ‘yes’ instead of ‘no.’” Until more recently, it’s been a rare occurrence to hear Swift curse beyond the word “hell,” so this is an exciting leap forward! But the “In my defense, I have none” line is classic Swift wordplay, and the rhyme is just too good to ignore. —Ellen Johnson

If this album had been treated to a more standard album cycle and schedule, “cardigan” would’ve been a single. Swift directed the stunning video released alongside the album and shot by renowned Mexican cinematographer Rodrigo Prieto. But the song is even more stunning as Swift drops little details like “Dancin’ in your Levi’s / under a streetlight” and “Your heartbeat on the High Line / Once in twenty lifetimes” to emphasize the comfort and familiarity of this relationship, even when she starts to falter. The line “You drew stars around my scars but now I’m bleedin’” is where her lyrical chops really shine. —Ellen Johnson

“seven” is one of the strongest songs on folklore as Swift marries whimsical natural imagery to lush dream pop. She nearly slips into Lana Del Rey territory as her vocals take on a darker tone than usual, but soaring strings lift “seven” to new heights. The line “I’ve been meaning to tell you / I think your house is haunted” possesses a casual cleverness that proves Swift is at the top of her game here. When she adds “Your dad is always mad and that must be why,” I can’t help but let out a giggle. —Ellen Johnson

“august” captures the fleeting feeling of late summer. As the last days of violent heat can feel unbearable during August and September, they’re also like one long golden hour for a year that’s quickly approaching colder temperatures and coming up on its end. Similarly, Swift recalls a lost “summer love” that slipped away too quickly on “august,” and little details like comparing that romance to a bottle of wine gone too soon make this song a winner. —Ellen Johnson

There’s harmonica on this song! “betty” is the closest Taylor Swift has ever gotten to Neil Young and probably ever will. Here she takes the point of view of a regretful teenage boy, which proves her empathy truly knows no bounds. “betty” also marks the first time Swift has said the word “fuck” multiple times in a song, which is noteworthy in and of itself (and also accurate for her teenage boy character study). Swift’s fans are grown up now, so there’s no reason she shouldn’t be allowed to curse as freely as she pleases. And here, it also sounds really great. —Ellen Johnson

There’s something both hilarious and cruel about old-timey medicine. People lit candles in their ears, ingested mercury and even took heroin for a cough. But one of the most well-documented and insane trends in primitive medicinal practices was a fundamental misunderstanding of women. Throughout history, people sought ways to “cure” women’s “hysteria” whether via lobotomy, hypnotism or just a really strong Martini. In this song, science is pushed to the side as a woman is blamed for her husband’s death—just out of good ol’ fashioned sexism. But these lines can also be read as heartbreak—the kind that has seen many spouses pass away in quick succession after the other. —Lizzie Manno

History has an obsession with making women seem crazy, and sometimes men even successfully convince women that they are, but the best thing women can do is lean the hell into it. With this tune, Swift’s character has embraced the role of local bad bitch, and that’s something we can all take notes from. —Lizzie Manno

Swift’s imaginative, character-based storytelling on this album is a welcome surprise. On “my tears ricochet,” Swift imagines an ill-willed partner showing up to the funeral of his partner who he repeatedly wronged. It’s a tragic image of justice and accountability never being served in the human plane, but the ghost of his partner pledges a ruthless haunting, and if we’re being honest, that might even be a more satisfying, poetic form of revenge. —Lizzie Manno

Diehard fans of Swift’s music have pointed to her songs’ relatability as their greatest feature. Swift has done that with varying degrees of efficacy throughout her career, but a line from “this is me trying” was one of the first Swift lyrics that really made me feel what her online stans feel, even if only for a moment. A lot of us get told that we’re inadequate, insecure or even self-destructive, and Swift showing listeners that sometimes when she hears that, she doesn’t turn it into flowers and rainbows, but actually falls deeper down that hole by playing into others’ view of her, is exactly the kind of imperfection that young people need to hear about. —Lizzie Manno

The bridge in “hoax” is a necessary look into how we lie to ourselves and lose focus, simply because it’s easier than devoting energy to check in with ourselves and make a purposeful change. It challenges us to analyze our motives and possibly reorganize our priorities, and sometimes, to realize that we may be in the wrong even when we don’t know it. Swift is torn between bitterness towards a partner who won’t fully show up for her and the sadness that comes with letting go, and she navigates it with grace and honesty, even dropping a sneaky nod to “my tears ricochet”: “I am ash from your fire.” —Lizzie Manno