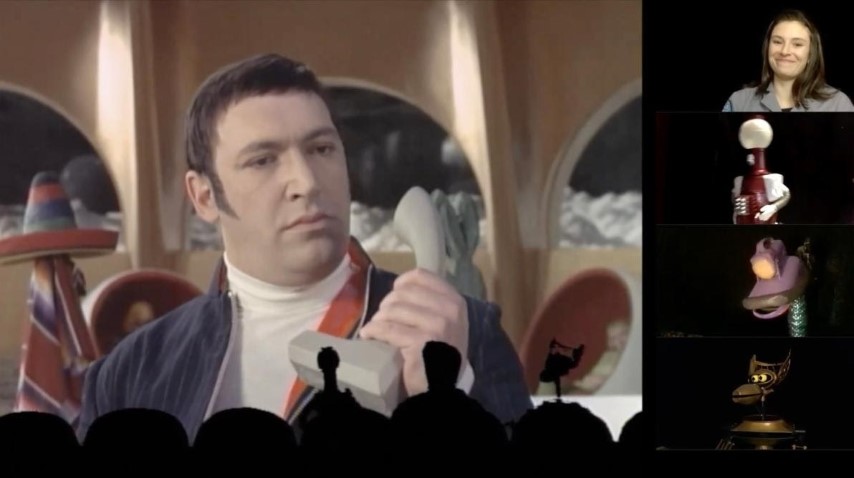 Although many of us geeks have surely been self-soothing through quarantine by re-watching decades-old episodes of Mystery Science Theater 3000—lord knows I have been—you soon won’t have to only be seeking out old MST3K content. The show today announced it would debut a special MST3K LIVE experiment they’re calling the MST3K LIVE Riff-Along, to livestream at 6 p.m. EST on Sunday, May 3. So in this case, it’s literally “next Sunday, A.D.”

This won’t simply be a broadcast of the MST3K LIVE stage show, or a new episode in the typical MST3K style, however. Rather, the creative team is attempting to pull off something they’ve never tried before: new commentary layered atop an existing, classic MST3K episode. They’ll be reexamining season one experiment 111, Moon Zero Two, which will feature “additional riffs, with visits from Joel Hodgson, who will field questions and comments from the Riff-Along audience via social media.” There will also be a brand new riff of the short film Circus Day. It’s interesting to see the team take on such an early episode, given the more relaxed and slower paced feel of the first season of MST3K, but as I wrote in my massive ranking of every single episode, Moon Zero Two “seems like a film that the crew could have made into a much more memorable affair if it had come along a few years later.” Now, the crew will get their chance to prove exactly that.

But the novelty doesn’t stop there. Absent the show’s most recent host from its two Netflix seasons, Jonah Ray, the special will be hosted by puppeteer and actress Emily Marsh as “Emily Crenshaw” (a Boggy Creek II reference?), which would technically make her the first woman to ever hold the position of “the human” in the MST3K pantheon. As one would no doubt expect, she’ll be supported by Tom Servo and Crow T. Robot, portrayed by performers Conor McGiffin and Nate Begle respectively. The whole thing will be going down via live videoconference, which is sure to add an aura of bizarre unreality to the entire project, but any way you look at it this is a big opportunity for Marsh to step up and showcase her talents. In its own way, it’s sort of reminiscent of the time Carrie Kelley stepped up to take the previously male mantle of Robin in Frank Miller’s The Dark Knight Returns.

Mega-Synthia (Yvonne Freese), one of Pearl Forrester’s many clones, is also sequestered at home right now with her roommates in Minneapolis, but that doesn’t mean she has given up on the Forrester family experiment! For this experiment, Mega-Synthia isn’t just subjecting the cast to a cheesy movie: she’s subjecting them to a cheesy movie already encased in a classic MST3K episode! It’s a RIFF on a RIFF in the form of a live MST3K Riff-Along! “As the pundits have foretold,” cackles Mega-Synthia, “pop culture will indeed eat itself — and the feeding begins May 3rd!”

To see what will surely be a memorable ouroboros of an MST3K love special, you’ll have to tune in on the MST3K Twitch channel, or the official YouTube channel, or the official Facebook page, where viewers will also be able to submit questions for the cast. As the press release reads, “MSTies worldwide are invited to chat along using the hashtags #MST3KLive and #RiffAlong.”