Love in the Time of Corona 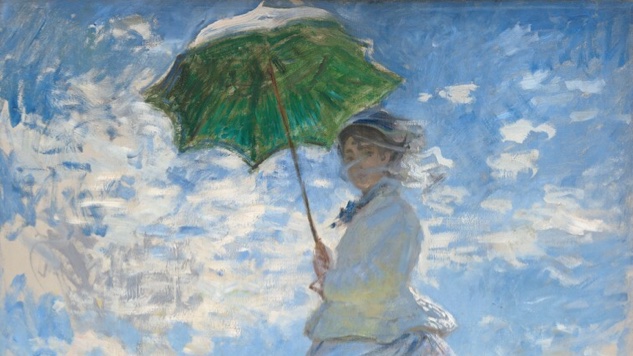 There’s a cliche that you can love someone so much that it hurts, and I’ve found that the cliche comes true in fleeting moments. I still remember an isolated image—an afternoon on my front yard when my wife held my daughter, who was then just a year old, and the light caught my wife’s face, and my daughter’s hair, in such a way that it seemed to capture something essential and beautiful about them, and their relationship with each other, and what it means to be alive. There was beauty in it, and there was pain. It brought me back to childhood, and an acute feeling that would overwhelm me at my happiest times—the realization that this joy would go away, that it couldn’t last, and that there was no experience so good that it wouldn’t be tempered by the nature of passing time.

I’m not overly knowledgeable about art, but the paintings of Claude Monet sometimes give me the same feeling, mostly when I’m not looking for it. In “Woman With a Parasol,” which I saw for the first time at the National Gallery of Art in Washington, D.C. five years ago, he captures exactly what I felt when I watched my wife and daughter that day. The woman is twisting to look back at the artist, the son is almost vague in the distance, neither of them distinctly happy or sad, and the motion he captures, and the quality of the light, emphasize—at least for me—this evanescent quality of watching something you love slip through time. I’ve always found it remarkable that he could commit that emotional quality, the pain and wonder of impermanent love itself, into the permanent medium of a painted image, so that I could stand before it almost 150 years later and be staggered.

I don’t mean to suggest that I live my life in a state of awe. These reveries are the exception, rather than the rule, and nearly every waking moment is dominated by unromantic action, planning, stress. But a virus like COVID-19, and the ongoing shutdown of our society, tends to heighten these moments simply because it makes me feel so vulnerable. If you’re naturally given to worry, as I am, it’s impossible to confront this crisis without letting your mind wander to the worst-case scenarios. We are being asked merely to stay inside and be smart about our interactions, but in my mind we’re a week, two weeks at most, from Cormac McCarthy’s The Road. The reality of living with anxiety, as so many of us do, is that deep in our heart of hearts, this is what we’ve been waiting for. This is what we’ve expected, what has dominated our dreams. Occasionally, in my most ridiculous and self-centered moments, I even wonder if the anxious people of the earth, with our collective worries, have nudged the particles of the universe in such a way that it’s influenced the bend of our reality. And to what end? The fact that I have no real plan for it beyond hoping that we can ride out the storm only proves the cruelty of anxiety—even when our worst dreams come true, the fear hasn’t fortified us in any meaningful way.

What I didn’t expect, and what hurts the most, is how wildly grateful it makes me for my life, for my family, for the time I’ve had with all of them, and the immense sadness of knowing that it will be taken away. I don’t mean immediately, or at least I hope—my wife is a health worker, and this makes us all more vulnerable, but we’re all under 40 and realistically I know that the chances of death are low (I often think about how the only reason I’m still standing is the knowledge that children rarely suffer the worst consequences). We have a shared vulnerability, not a shared fate. But the specter of collapse, of death, heightens the realization that lingers perpetually in the back of my mind…that one way or another, little by little, all of this is going away.

And I want to rage—how dare anyone give me something so precious, so perfect, and not just make it temporary, but fill me with the idea that it’s temporary? I’m not a religious person, but I’ve been thinking about the Adam & Eve story lately, and it’s occurred to me that rather than shame, or the seeds of evil thought and action, to really punish humankind, God only needed to imbue them with knowledge of their mortality.

Of course, it’s the temporary aspect that makes it ripe with meaning. And there are plenty elements of life that make the idea of permanent existence sound just as horrible as it would no doubt be. In my moments of dark rumination, I think of a permanent jail for the mind, a place where you can be held forever, and in times like those I realize that death is also a gift, and I hope that death, rather than hell or heaven, is an end in itself. Life is reward and punishment enough. This past summer, while rehabbing from knee surgery at the YMCA, I was deep in conversation with a college distance runner, and we spoke about the health benefits of his sport. “You’re going to live forever,” I told him, and this 21-year-old, with his entire life ahead of him, shook his head immediately.

And I agreed with him—give me a good stretch, free from more suffering than I can handle, and I’ll call it a good life. And that thought can sometimes center me, sometimes immunize me from the fear and stress of life, because ultimately the ending is the same. This state of mind, I think, must be close to what people mean by Buddhism.

But it’s the love that brings you back. When you make connections with other beings, when you have friends, when you get married, when you own a pet, when you have a child, you become entangled and committed, and it becomes too important that things work out the right way, here and now, on Earth. No matter how many Buddhist texts I read, or how often I practice meditation, I will fail because I’ll never stop caring. If you meet somebody who is angry about politics, someone like me who occasionally tweets more harshly than I should about the stupidity and corruption around me, who has given money and spent time calling dozens of strangers in Minnesota and Virginia and South Carolina to ask them to participate in a national election, just know that it’s somebody who cares a great deal, and if that person goes overboard, it’s because they want what’s best for the world so badly that it hurts. They love this place the way I love my wife, and my daughter, and watching it disintegrate, when the solution seems close enough to touch, is excruciating.

I don’t limit this to one candidate, or one cause, or even to candidates or causes I personally consider “good.” I’ve always suffered from empathy, and I believe empathy quickly turns to anger when confronted by those who seem unempathetic, who have the capability of destroying people and the institutions that protect us, but I also know in my calmer moments that these people don’t consider themselves evil, and (mostly) think they are doing their best to follow their values. And if that doesn’t make their ultimate aims less heinous in my mind, it at least imparts a valuable lesson about who is culpable, and about the different paths we’re led down, perhaps helplessly, by our brains.

It comes back to love. My mother used to cry when looking at me, and she cried again this past weekend when I left her. When my daughter, now two-and-a-half, sits down next to me at my office and says, “dada can we please do podcast?”, I know the feeling. When I see my wife smile at me or laugh across the tennis net, I know the feeling. I had a sudden flash of thought while driving, maybe a month ago, that for the first time in my life, without question, there were two people I would die for. It’s not even a dramatic thought, or some puffed-up way of proving myself—just the reality that yes, if it came down to me or them, I would absolutely choose my wife and child over myself. How could it even be a question?

But I don’t want to die, and I don’t want them to suffer. In the time of corona, whether it lasts a week and this post winds up looking ridiculously melodramatic, or the darker visions in my mind become reality, the fact is that our love is heightened by the very fact of its vulnerability. I am living in a rawer emotional state. How can I not picture my wife or child dying in an overcrowded hospital? How can I not picture us starving as we stagger down a last highway? How can I not be overcome by fear, by the question of whether it’s in my power to protect them—if I’m fundamentally weak in the face of real trouble? The thoughts come and go, and I’m sane enough to recognize their unlikely nature and press on with what needs to be done, but I’m left each time with the intensity of my love: a transporting gratitude for the miracle of existence, for the miracle of human connection, and a pure, blinding pain as the minutes disappear.