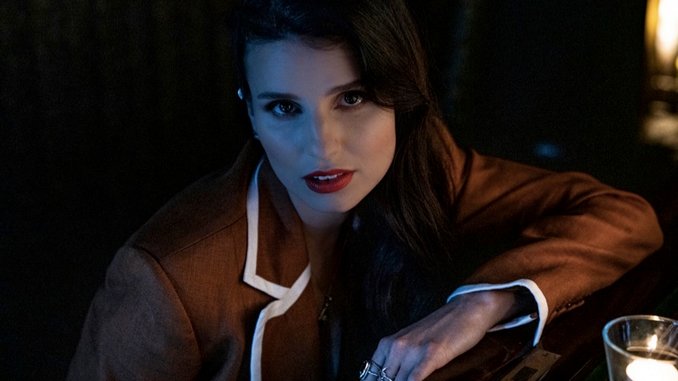 You know one when you hear it.

Every once in an audiophile while, like a bolt out of the blue, we’re gifted with a pop song so sunny, so chiming, so pure and perfectly crafted, that it might have been sculpted by the angels. No melodic faults, no clunky chords, no errant turns of phrase, just ebullient euphonic verse-chorus-bridge constructs that only strengthen with each successive listen. And there’s no predicting where or when said lightning will strike—often, it appears humbly amid an artist’s otherwise unassuming catalog, like, say, the jangling hip-shaker “Cynical Girl” on Marshall Crenshaw’s debut disc, or the hypnotic “Sing” from Scottish quartet Travis, or even something as undeniably universal as the classic “Baby Blue” by Badfinger, which Breaking Bad showrunner Vince Gilligan revered so much he chose it to close out the final minutes of his hallowed series. You can’t predict when or where you’ll hear it. All you know is that you immediately want to hear it again. And again. And again. Until the next bolt of lightning thunders along.

Add to this elite roster another immortal new number, which just happened to pop up in the middle of a pandemic—“My Own Worst Enemy” from Australian folk-rocker Imogen Clark, who has been swinging for the hit-single fences for four albums Down Under but finally knocks it straight out of the park with this confection from her latest American EP, The Making of Me. Other tracks, like the swaying finger-popper “Found Me,” a haunted “Paper Boat” ballad, the Poco-ish “Push Me Down,” a bluesy “Inside Out” and the title-track processional, come dangerously close to that pinnacle, as well.

Following the whole record’s theme of self-empowerment and discovery of one’s latent identity, guitars ching-ching from channel to channel on “Enemy,” as Clark’s slapback-echoed voice— almost rockabilly in its retro urgency—stalks its way to a defiant pre-chorus declaration: “I’ve been reminiscing ’bout the the things you said/ You’ve been talking bullshit under wet cement/ Taking me for granted, getting in my head/ After keeping me in black and white, I’m technicolor overnight.” Then that chorus kicks in, bolstered by the sonic boom drumming of Elvis Costello alumnus Pete Thomas, and you’re hooked, humming along with “You’ve always told me I’m my own worst enemy/ You can’t turn me out…” The icing on the cake? A hush in the mix for an airy bridge—“I can’t/ Go back/ Now/ Even if I wanted to”—until it swirls upward into a heady “Oh-Whoa-Oh” coda. After which you instantly hit Play on this ephemeral little masterpiece, again. And again. And in these dark Coronavirus times, you have to seize on such blinding rays of sunlight wherever you can. They aren’t beaming through that often.

Remarkably seasoned at 25, Clark knows her trade well enough to understand that she’s created something quite magical here. And she perceives the importance of its individual components, like song co-writer Alex Lahey (who also plays guitar), the propulsive Thomas, no less than veteran Heartbreaker Benmont Tench on keyboards, all laced together nicely by the keen-eared production of Rilo Kiley mainstay Mike Bloom, which finally puts some wind behind his subject’s vocal sails. Raised in the Blue Mountains outside of Sydney, she studied her punk-band-fronting father Mark Clark from an early age, started singing at age eight, picked up guitar two years later and began playing covers for pocket money at 12. But she wasn’t certain she wanted to follow in dad’s exact footsteps just yet.

”I thought, ‘I love this—I love singing and playing, but I don’t know if I want to do this forever,’” she recalls. “That is, until I wrote my first song at 14—I felt a connection to it that I really enjoyed that I never felt before, and I thought, ‘This is what I want to do.’”

Even though the number, an angst-ridden lost-love paean called “By Candlelight,” “sounds more cringe-worthy than it actually was—looking back on it now, it was not a bad little song,” she adds.

But therein hangs the tale, unfortunately. It’s taken Clark this long to not only unearth her true identity, but to carefully analyze the stylistic shifts leading up to it, as well, on the aptly-dubbed “Making of Me.” Her previous albums have had a dustier, folkier feel that didn’t challenge a listener like her new work, with any traces of necessary reverb drained out of her blunt vocals. And her appropriately pastel wardrobe didn’t make waves, either, which only serves to underscore her transformation into a playful fashion firebrand, fond of cherry-red lipstick, platform heels, retro-chic bellbottom trousers, and campy ’70s jackets, which, in turn, perfectly complement her boisterous new sound; “I’m technicolor overnight,” she promised, and she meant it.

Navigating these changes hasn’t been easy, even with helpful family advice, she concedes. “And I think this often happens with young female artists—there will be people who have this idea of what they want you to be, how they want you to look, and what they want you to wear,” she says. “People were even thinking I was a country artist for a while. So I’m coming into my own now with this EP, and part of that is from just growing up as a woman, being in my mid-20s, and feeling like I’ve seen a bit more of life than I have on my previous records. But it’s also because we made this record with the idea of no longer being beholden to anyone else’s ideas of what sort of an artist I was.”

That’s her prime directive now, she adds: “It’s important to know who you are and just stay true to yourself. And now, for example, I’m loving wearing suits, and it’s just such a liberating feeling wearing one—you feel powerful, in control, and I think that really does represent the music I’m making, as well.”

Clark is a real music enthusiast, and she loves discussing everything from the cutting-edge Aussie music scene of the past few decades and memorable acts like RatCat, The Hummingbirds, The Triffids, Hunters and Collectors, and the definitive Australian Crawl. She even got to open an acoustic solo tour for that band’s inimitable frontman James Reyne a few years ago, she states proudly, and she still gets shivers remembering him singing elegiac hits like “Reckless” every night, with crowds crooning along in tandem. She speaks in reverent tones about Bruce Springsteen and she’s a huge Tom Petty fan, too, and she enjoys analyzing what makes a deceptively bare-bones anthem like his “You Wreck Me” tick. “He’s been a huge influence on my music, that’s for sure,” says the singer, whose jaw hit the floor when she saw Benmont Tench stroll into her studio sessions for the first time. “He had this…freedom, and an ability to express that so simply, with such simple chords and simple lyrics, and yet he always hit the nail right on the head.”

The artist also has a tell-tale fondness for Taylor Swift, who made the transition from country twangsmith to arena-rousing pop star with relative ease—a path she hopes she’s currently on, since she’s been frequently jetting to Nashville for various co-writing sessions until trips were curtailed by lockdown, along with an introductory U.S. tour opening for Jim Lauderdale. “For some reason, in the past I always had this weird idea in my head about pop music being some kind of a dirty word, where you feel like you’re selling out when you go bigger with your music,” she says. “But for the first time, with this record, I actually just went, ‘You know what? Fuck it! Let’s just make a record! I don’t care about genre it is—let’s just let the songs be what they want to be, production-wise.’ And that liberation was the most exciting thing about it. We were just doing it with no rules anymore.”

Clark says that her manager—who also helms Lauderdale’s career—keeps telling her how he wished he had a photograph of the look on her face when Pete Thomas started keeping time on his kit for the first run-through of “My Own Worst Enemy.” “He just counted in and started playing, and within the first five seconds I just looked at my manager, and he said, ‘The smile on your face was like the most joyous look on anyone’s face, ever.’ Because he instantly brought this new propulsion to the song, this energy,” she notes. “It’s this energy that’s just undeniable and something that really makes a song, in my opinion.”

Now that Clark has found her perfectly polished technique, she’s toying with applying it to her past catalog, like 2018’s more jangly Collide, produced by her longtime mentor and tourmate, the Australian artist Diesel (Mark Denis Lizotte, formerly of Johnny Diesel and the Injectors). “I look back on some of my old songs, when I was sort of being marketed in the country area, and I think the production being changed slightly on some of them—and actually redoing them in my style now—would make them sound completely different, and not at all country. So it’s all about the production, isn’t it?”