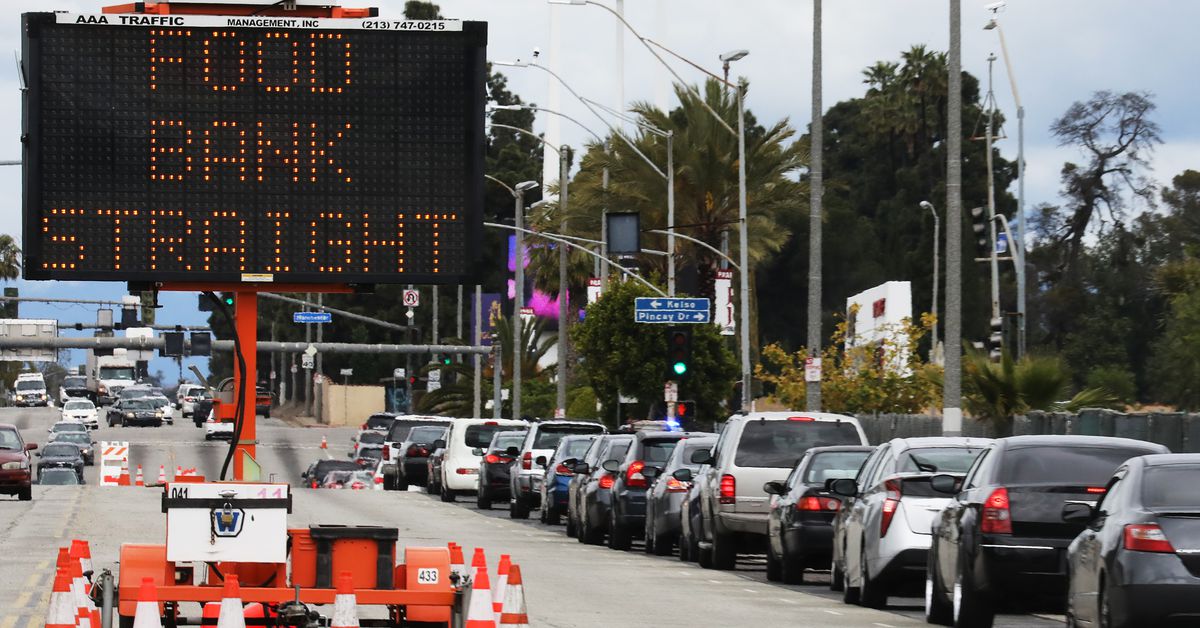 One of the lasting images of the coronavirus pandemic will be that of thousands of cars lined up bumper to bumper in front of food banks, a reminder of how many people in the U.S. have lost their incomes and the ability to feed themselves and their families over the past three months. Food pantries and other nonprofit organizations have struggled to respond to record demand in the face of such food insecurity, while also dealing with difficulties brought on by disrupted supply chains and volunteers who themselves may be vulnerable to virus exposure.

“There’s only so much we can do,” Radha Muthiah, president and CEO of D.C.’s Capital Area Food Bank, told Politico. “The federal government has an incredibly important role to play here.”

But some lawmakers say that federal agencies’ response to address this crisis has been slow. Out of the $850 million that the CARES Act and the Family First Coronavirus Response Act set aside for food banks nearly two months ago, less than $300 million has been sent out so far, Democratic members on the Senate Appropriations Committee told the Washington Post. The Post reports that those lawmakers aren’t accusing the Trump administration of “deliberate foot-dragging,” but rather, are saying that the status quo federal bureaucracy has not acted with the urgency that such an unprecedented situation requires.

Independent analysts told the Post that government agencies may just find their regular systems overloaded with these new demands dealing with enormous amounts of money. Agency spokespeople also defended their responses, with the Department of Agriculture claiming that all of the funds for food banks have been distributed to the states. “As orders come in from states, USDA is working to rapidly procure over $600 million in food. Expedited deliveries are expected to begin in June,” the USDA told the Post.

But allocating funds for food banks may not be enough to address an emergency of this scale. Politico reports that food banks and anti-hunger advocates have asked Congress to increase Supplemental Nutrition Assistance Program (SNAP) benefits so that recipients can more easily buy groceries, arguing that food stamps — which the Trump administration has sought to limit, recently appealing a court ruling that blocked restrictive rule changes to the program — are a more efficient way to address hunger while reducing the “stress and stigma” of waiting in food lines. Per Politico:

[T]he fact is SNAP feeds far more people than food banks do: For every meal a food bank provides, SNAP is estimated to provide nine. The program covers families whose net income places them near or below the federal poverty line. The average benefit is $129 a month per person.

Food banks say that they won’t be able to keep up with the increased demand in the months or even years that it will take for the economy to fully recover.

“We’re really facing a food insecurity crisis unlike anything we’ve ever seen in the history of the charitable food system,” Nicole Whalen, a spokesperson for the Vermont Foodbank, told Politico. “It’s just made it abundantly clear that we need additional support from the government … This is a network already doing as much as we can. To actually have a really high impact, it’s SNAP, it’s not this.”