Dead Can Dance: Celebrating the Spirit of Dionysus 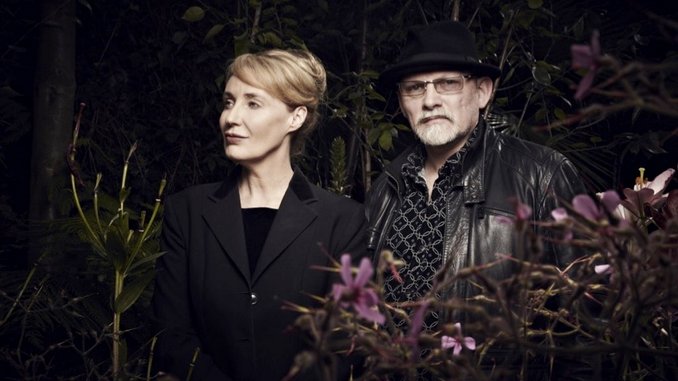 Despite mounting evidence to the contrary, keen-eared Dead Can Dance founder Brendan Perry swears that he hasn’t become a monomaniacal, house-cramming hoarder of arcane musical instruments. Yet. “But it is getting ridiculous,” allows the Brit, who now resides in France but first formed his ethereal outfit with vocalist Lisa Gerrard in her native Australia back in 1981.

“The wife just looks up at the heavens every time that UPS arrives with another new instrument, so my collection is growing with every new project.” To wit, the duo’s latest ambitious undertaking—a two-act, seven-movement concept album called Dionysus based on the Greek god’s multi-faceted pagan persona, which was once vilified by both Christianity and Islam—features all of these disparate Perry-played devices, in order of appearance: zouma, gadulka, autoharp, bowed psaltery, davul, ocean drum, saz, pivana, daf, aztec flutes, rainstick, bird whistles, berimbau, gaida, balalaika, gong, fujara, baglama, zils, zitherm harp, and—of course—a good old-fashioned stone.

A sonic perfectionist, he knows exactly when and where to use each delicate tool to tell his historical tale, from the opening “Sea Borne” (wherein the outsider Dionysus arrives by ocean) through “Liberator of Minds” (which explores his more hallucinogenic aspects), “The Invocation” (which summons him to the annual harvest festival, “The Forest” (underscoring his back-to-nature message), to a closing “Psychopomp,” exploring his additional role as a guide to the afterlife. While Gerrard adds her otherworldly voice to “Psychopomp” and “The Mountain,” the credits say it all: Dionysus was performed, recorded, produced, engineered, and mixed by Perry himself, with such a meticulous attention to detail that nothing but the most evocative instruments would do.

And—nine albums into its classy career—fans would expect nothing less from this team, which has been forced to postpone its spring tour in the wake of the current coronavirus pandemic. But Perry was more than happy to explain the method behind his madness in the interim, and the lengths to which he’ll go to achieve the soundscapes that he envisions.

Paste: Where do you find all these instruments?

Brendan Perry: Well, to give you an instance, I’m working on an album of old Greek songs, and in pursuit of that, I have to be as authentic as possible in the instrumentation. So I’ve kind of acquired a lot of different instruments for it, like family bouzoukis, tzouras, a santouri. Just working on this one project, I’ve ended up with seven new instruments. And that’s the way it’s gone over the years—whenever I’ve gotten into a certain genre of music, I tend to research the instruments and see it right through. And I always end up with a lot of new instruments, per each adventure.

Paste: Which ones have surprised you the most, sound-wise?

Perry: That’s a tricky one. It wouldn’t be stringed instruments so much because I pretty much know what to expect from them. Hmmm. Probably it was the yayli tambur, which is a Turkish bowed instrument with a long neck. It has a kind of banjo resonator body, so it’s got a bit of reverb in the sound—it’s got a kind of metal bowl that works with the long neck as a resonator. But really the ones that often surprise me are the synthetic instruments, and the one that really is quite special that I’ve acquired over the last few years is a keyboard with a synthesizer built into it, and it’s called a Haken Continuum Fingerboard. But the fingerboard itself doesn’t have conventional keys—the keys are painted on the kind of material you have in skindiving suits, neoprene. And it’s touch-sensitive, so when you press in, it gets louder, but it doesn’t have a 12-note tempered scale. It can be free-form, so you can get into micro-tones between the notes and do slides and things. And that’s pretty remarkable, because the actual playing of the Haken is very much just half the equation. It’s your expressiveness and the way that you can work with this neoprene surface that’s pretty amazing.

Paste: Do you scour eBay to find these items?

Perry: Yeah, I do use eBay a lot for older instruments. For quality vintage instruments, I tend to always go to eBay. But for new instruments, generally the hardest things to find are the electronic units that they only made so many of, like effects units for the studio. You can always find the instruments, if you’re willing to pay the price. But with electronic instruments, and classics like the Marshall amp, it isn’t the amp itself—it’s the Marshall modulator, which was something that Martin Hannett, for instance, used on all of his productions. And this modulator, this machine, you find them occasionally, sometimes not working, for about two and a half thousand, And they’re not even working! So things like that are really, really rare. It’s only a question of just sitting there and waiting, and eventually they’ll turn up.

Paste: Have you ever traveled to some exotic land for your collection?

Perry: Yeah. A few times. One that comes to mind is when I went to buy a bouzouki from a maker out in the suburbs of Thessaloniki in Greece one time. I just knew I wanted one from this particular maker. So now I have about 15 acoustic guitars, three bass guitars, and I’ve got lots of santurs, Turkish lutes. I’m looking around my collection right now, in fact. I’ve got violins, fiddles, cellos, a dulcimer, and lots of percussion.

Paste: How do you decide which to take on tour?

Perry: Well, the ones we can play without having to grow an extra arm—those we take with us. And I kind of play between the bouzouki and the electric guitar now, so then I take whatever else is necessary. Like, for our concerts coming up this year, it’s primarily for the instruments that we use in the Dionysus songs and nothing more. And because of the way technology is now, we can have two keyboard players and cover all the orchestrations, as it were, like strings, brass, and wind instruments. And we have a conventional bass guitarist, and we have a dedicated percussionist, and my brother Robert plays all the other instruments, like the Irish whistles we often use.

Paste: Why focus on Dionysus?

Perry: Since I was a young boy, I’ve always been interested in Greek mythology. I read Ulysses when I was about 10, and it’s kind of stuck with me over the years—just Greek society and that golden age of philosophy and invention. And Dionysus was probably the most concentrated of a singular thought, and thematically, it’s the most unified album we’ve ever done. And that’s based on the spirit of Dionysus, not so much on the mythological Greek figure. But more the Dionysus that still exists in various cultures around the world.

Paste: And the mask on the cover is significant, too. It’s traditionally made by the Huichol people of Mexico’s Sierra Madres mountains, who often use peyote in their rituals?

Perry: Well, the Dionysian kind of ceremonies, the subtext of it really is that moment when you have an out-of-body experience and you realize it, like “Wow! What’s happening to me?” It’s like a reconnection, almost like you’re re-jigging all of these things that you thought were real. You’re going to have to rewire them and have a second take on things. But this coming together of people had this mass experience of getting out of your head, but it wasn’t really an escape—you’re moving into something else, appreciating things on a different level. And this was done through various means at these big raves, I suppose you could compare them to, where people came together. They put a lot of emphasis on drugs, but the majority of people would get into that same heightened consciousness through rhythm and dance. They’d dance in these big circles with these driving rhythms, and probably with the aid of a little bit of wine. But dancing for hours, it’s incredible what’s happening to the body and the mind. And you see things differently afterwards,. You’re never, ever the same.

Paste: And you’ve had out-of-body experiences like that, too?

Perry: Well, I’m not talking about floating around outside my body. But I’ve had lots. One of them was my first acid trip, and another was through mushrooms, taken in Ireland where they’re in the countryside everywhere. But one that really comes to mind was going to a festival in Calanda, Spain, and taking part in these ornate drumming rituals, where you play all night long, from nine o’clock in the evening right through to six o’clock the next morning. And you get to a point where you’re really not aware of any pain or sensation. I think it’s the endorphines that are released into your system after awhile. We were playing so much, our hands were blistered up and we had blood coming out of our hands until it covered all our clothes. But that’s what happens. You go into a trance and you don’t really feel any discomfort or pain, and people are passing around wine and you have sacks of olives in your pockets to keep the energy up.

Paste: Last time we spoke about your fondness for archery.

Perry: I don’t really do the archery stuff anymore—I just moved on to different things, really. And at the moment, it’s the blues—I’m really getting back into Delta and Mississippi blues. And I’m kind of re-learning the guitar. The Greek music I’m doing for this new album is kind of like the Greek blues, and they were partially influenced by the 78 rpm records that were coming out of the States, all these early blues recordings. So I’m finishing up that project now, but I’ve segued back into one of its main tributaries, like it was a river.

Paste: And Dead Can Dance can theoretically go anywhere from here.

Perry: Oh yeah. I’ve been talking with Lisa about doing a new album, and we’re thinking of doing a Neo-baroque record with a small chamber orchestra.

Paste: Don’t fix it if it ain’t baroque!