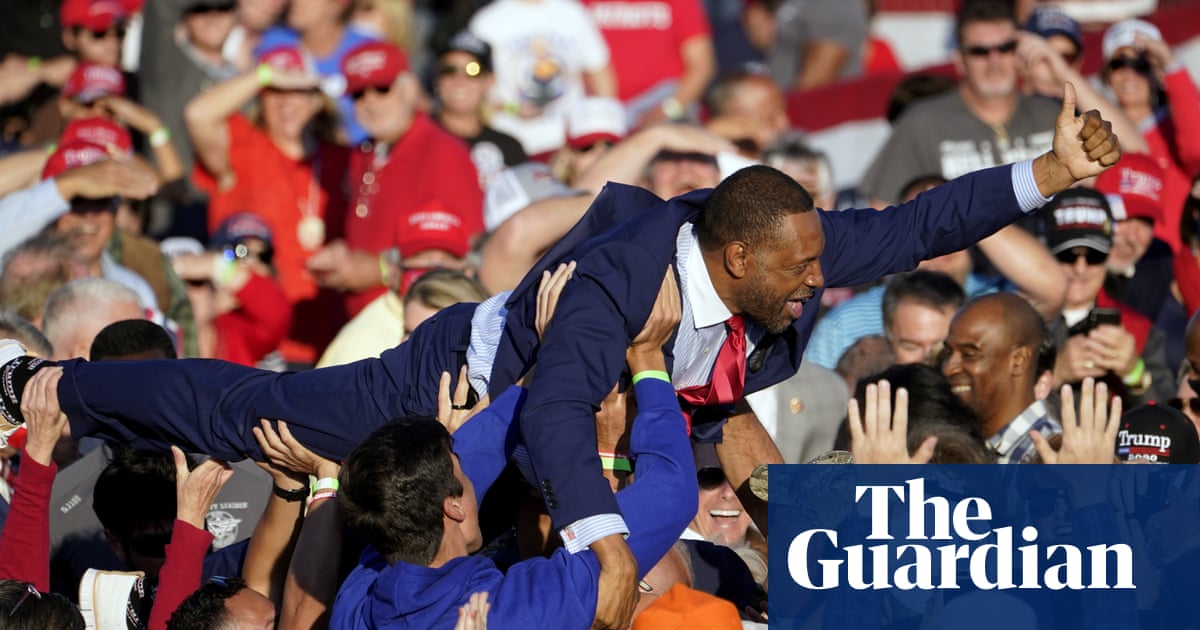 When Vernon Jones, a Black Democratic state representative from Georgia, crossed party lines to deliver a passionate endorsement of Donald Trump at the Republican national convention, the party greeted him like a rock star. Now comes evidence the label has gone to his head.

At a Trump rally in Macon, Georgia, on Friday night, Jones launched arguably the most ill-advised and dangerous crowdsurf since the electro dance legend Steve Aoki broke a concertgoer’s neck in a dinghy.

Thumbs raised and not wearing a mask, the 59-year-old lawmaker launched himself into a mostly maskless audience. Riding a sea of red Maga hats, packed tightly together in contravention of Centers for Diseases Control and Prevention Covid-19 social distancing guidelines, the grinning Jones was passed overhead from deplorable to deplorable, to use a term for Trump supporters Jones cited in a tweet defending the stunt.

“Yes, I surfed that crowd!” Jones wrote. “To the haters – stay mad! You’ll be even more mad come 3 November.”

On social media, reaction was swift and brutal. One Twitter user dubbed Jones “Captain Covid”. Others denounced him as an idiot and a loser, living in fairytale land.

Republicans hope Jones, who was first elected to the Georgia state house in 1992, can help shore up the Black Republican vote in his state. Trump won Georgia from Hillary Clinton by more than five points in 2016, but recent polls show the president trailing Joe Biden by almost one and a half points.

Race has also emerged as a key theme in Georgia’s tightly contested US Senate contests, in which both of the Democratic candidates, Raphael Warnock and Jon Ossoff, hold narrow leads, according to Quinnipiac polling this week.

One of the Republican incumbents, David Perdue, was involved in an incendiary moment at Trump’s Macon rally when he mangled the name of Kamala Harris, Biden’s running mate, the first Black woman on a major party presidential ticket.

Perdue’s campaign claimed it was an innocent mistake but Ossoff, in an interview with MSNBC, attacked his opponent for “vile, race-baiting trash talk”.

In the other race, a special election in which Warnock, a Black pastor, faces both the Republican incumbent Kelly Loeffler and Doug Collins, a serving Republican congressman, the spectre of QAnon looms large. Loeffler has embraced the endorsement of the far-right congressional candidate Marjorie Taylor Greene, an enthusiastic peddler of baseless QAnon theories who has expressed racist views in social media posts.

At the Republican convention in August, as one of a number of first-night speakers of color to deliver a similar message, Jones tore into Democrats’ handling of racial issues.

“Why is a lifelong Democrat speaking at the Republican national convention?” he said, in a controversial speech he later said he intended to be “a culture shock”.

“The Democratic party does not want black people to leave their mental plantation. We’ve been forced to be there for decades and generations.”

Jones resigned his Georgia House seat in April, after first endorsing Trump. But he rescinded his decision days later, claiming he had received “overwhelming support”.