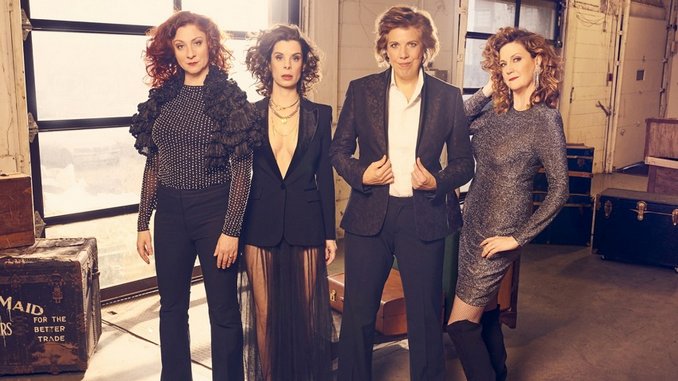 As Baroness von Sketch Show returns to IFC for its eight-episode (all of which were available to review) fifth and final season, it should come as no surprise that it ends the way it began: as consistent and pleasant (even in the face of unpleasant topics) as ever. One could even say that the series remains unflinchingly and quintessentially Canadian—especially when it comes to the accents and certain turns of phrase—which has always been a part of its charm, while still remaining comedically accessible to American audiences. As I wrote in my review of Baroness von Sketch Show’s fourth season: “Because, despite the aspects of the series that make it very specific and come from a very underappreciated perspective and demographic (again, in addition to the Canada of it all), it still is able to cover a large amount of the feminine perspective, regardless of race, ethnicity, and/or age.”

Naturally, that relatability remains in this final season, even with the major change in the landscape of the world. Filmed last fall, this season of Baroness von Sketch Show—which, in case you missed it, is still starring, created by, and written by Canadian sketch comedy quartet Carolyn Taylor, Meredith MacNeill, Aurora Browne, and Jennifer Whalen (who also serves as showrunner)—obviously exists in a glorious, pre-pandemic world. But even with that in mind, there are certain sketches that just kind of hit differently as they air in these quarantimes. For example, there’s a sketch set at an all-you-can-eat buffet that simultaneously creates an unintended longing for such a mundane experience and a reminder that buffets are hotbeds for the spread of disease. It’s definitely not the intent of the sketch to invoke the latter, but seeing it now in 2020 certainly inspires that added layer of dread… in a funny way! There’s also the series finale-opening sketch, set at what seems to be a 2021 New Year’s Eve party, which ultimately pings onto something that one can only imagine the Baroness von Sketch Show stars and writers never expected to ping onto, simply because the sketch comes from the (actually expected) place of 2020 being a terrible year.

Plus, throughout the entire season, Baroness von Sketch Show latches onto the understandable anxiety of parties and group gathering—to the point of discussing a hypothetical party in a terrible Good Will Hunting-inspired* sketch—which is natural fodder for the series that now also features an added layer of understandable anxiety thanks to current events.

Part of what allows Baroness von Sketch Show to remain applicable during these times, even when shot practically a year earlier, is that aforementioned relatability, as well as its commentary on systemic issues that just don’t seem to go away/remain prevalent, despite all the talk. The most biting sketch of the season (“Celebrity,” seen above) opens the second episode, as a game of Celebrity is ruined by the clue: “He’s famous. And he was charged with sexual misconduct.” As the characters in the sketch continue to guess which celebrity male this could possibly be—with clues narrowing it down, like “And he’s still working today,” which only widens the net—it only gets more depressing, which, in this case, only makes it funnier. (Funny because it’s true, funny because it’s sad; it’s all quite similar in its darkness to Baroness von Sketch Show’s past sketches about how cops treat sexual assault cases.) At the same time, Baroness von Sketch Show is still able to tackle these realities in more irreverent ways as well, with sketches like the one where a man breaks the record for “fastest man to verbally accost a woman right after flirting.”

Even if you watch this season without examining it through the lens of where we are now in the world (at least, in terms of the pandemic), this is still a successful and strong final season for the show. While it doesn’t find itself going off into the television sunset with a big farewell—as nothing in the episodes themselves even call attention to the fact that this is the final season, and it really wouldn’t even be the show’s style—there’s nothing to suggest that the Baroness von Sketch Show writers ended things because they simply ran out of ideas. In fact, Baroness von Sketch Show is still extremely aware that it’s a sketch show starring and created by four white women “of a certain age,” and a lot of the sketches in this final season continue to reflect that and lean into the jokes that come out of that, without even fully going to the “Karen” well in the process. (Last season’s “That Lady” sketch kind of covered that territory anyway.)

At the same time, you don’t have to be a 40+-year-old white woman to understand and appreciate sketches like this season’s “Emotionally Radioactive” or “Witch Trial” or “New Condition” or the deranged “Wedding Kiss” or even the sketch literally called “40+Hangover.” And you definitely don’t have to be a 40+-year-old white woman to understand “Reverse Air Bud,” a sketch that serves as a very important reminder that Baroness von Sketch Show isn’t just a sketch comedy show about important issues for women: Sometimes it’s a sketch show about a grown woman pretending to be a dog. But it’s also a sketch show that—blissfully—still knows that not every sketch needs to meet a certain length or be longer than it needs to, as one of the funniest sketches of the entire season is simply a question and answer. (Not to be confused with the sketch centered on an audience Q&A after a film screening, which is a premise that anyone can understand and appreciate.)

One thing that remains in this final season that has always been ingrained in Baroness von Sketch Show—other than Meredith MacNeill’s still-impressive ability to start a sketch at an 11 and somehow keep it there or ramp it up—is its unabashed queerness, from gender fluidity in sketches (which was, perhaps, the most expected part) to the simple fact that the sketches rarely assume (or even suggest) that the default for its characters are straight (which was, perhaps, the most pleasantly unexpected part). Baroness von Sketch Show’s Carolyn Taylor is an out lesbian, and as she told the New York Times in 2017, “I like having queer characters represented and having that part of me heard.” That has been reflected throughout all of the series and not just in Taylor’s characters either, and it’s something that newer sketch shows (such as A Black Lady Sketch Show and the since-canceled Astronomy Club) also have ended up having as part of their comedic DNA.

Baroness von Sketch Show’s ability to be consistently relatable and witty and funny and poignant—and somehow always at the same time—is something that makes it enjoyable to watch now, but that’s also what will make it even more enjoyable to go back and revisit. That is certainly the case for this final season, especially once watched removed out of the strangely appropriate timing that is this pandemic. But even watching it now, as I said: It just kind of hits differently. In a good way though, kind of like Canada itself.

Despite her mother’s wishes, LaToya Ferguson is a writer living in Los Angeles. If you want to talk The WB’s image campaigns circa 1999-2003, LaToya’s your girl. Her writing has been featured in The A.V. Club, IndieWire, and Entertainment Weekly, among other publications. You can find her tweets about TV shows, movies, and music you completely forgot about @lafergs;.