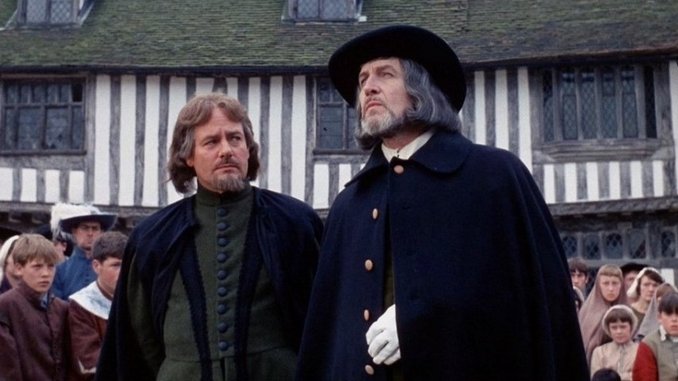 It is true that physical violence is often the basis of horror cinema, but sheer callousness toward humanity, coupled with a hypocrisy that knows no bounds, is capable of amplifying that sense of horror in ways that make your skin crawl … especially when based in historical reality. So it is with Vincent Price’s Witchfinder General, a fictionalized account of the murderous exploits of 17th century witch hunter Matthew Hopkins. Played by the ever-arch Price, it could have been a film that shamelessly played the witch-hunting era of the English Civil War for simple shock value, doling out horrors and sexual content that might seem at home in a “women-in-prison” movie, but Witchfinder General instead steers itself more in the direction of sober condemnation, rather than titillation. It’s a surprisingly mature warning against weaponized belief and the kind of dangerous charlatans who rise to power when they sense opportunity in destabilization.

That’s how Price plays Hopkins: An opportunistic predator, ready to take advantage in an era of lawlessness created by a country in the midst of chaos. He’s the kind of man who might lead a more or less normal existence during “normal times,” but in a time of division, lacking any real form of oversight, the temptation to indulge his worst fantasies becomes entirely too enticing to resist. It’s the kind of evil permitted by a complacent society, full of citizens simply trying to keep their heads down and focus on “me and my own.”

This kind of evil complacency is communicated quite clearly by the film’s opening moments, in which a screaming woman is slowly and painfully dragged to the gallows, howling inarticulate curses at a small crowd of gawkers while a priest intones passionless scripture. It’s Hopkins’ doing, of course, but he’s not there to look on—Matthew Hopkins is the sort of condemn, but not the sort to do his own dirty work. He simply points the finger of divine accusation, collects a paycheck for each witch found, and skips town without even having to confront the horrors he’s directly facilitating. He’s a coward in addition to a hypocrite.

Into this scenario is thrust a young man, Richard Marshall (Ian Ogilvy), a soldier for the Parliamentary side of the Civil War whose fiance and prospective father in law fall in the path of Hopkins and his cronies, with the father (a priest, no less!) eventually being executed for witchcraft, and the daughter being defiled by Hopkins, who proves himself a lech as well as a fiend. From here, the film unmistakably takes on the hue of a horror-infused English “western,” as Marshall abandons his post to track Hopkins and his assistant across the countryside, closing in for revenge like he’s Rooster Cogburn. It’s clear that someone is going to have to pay, and pay dearly.

Justice is of course meted out eventually, and along the way we are privy to plenty of stabbings, shootings and beatings, complete with the requisite splashes of red tempera paint. The film has an odd tone and visual identity, feeling like a lost link between the idea of Hammer Horror and the American B-horror cinema of AIP (American International Pictures). And indeed, it was a co-production between American and British studios, although the English studio in charge of shooting was Tigon British Film Productions, known for the likes of The Sorcerers and The Blood on Satan’s Claw.

The star of the show is of course Price, who has turned down the hammy delivery here in favor of a cold cynicism and detached misanthropy that makes him easy to hate. His Matthew Hopkins isn’t a creature of passion so much as one of convenience—he saw a way to grab power and wealth during a time of turmoil and never hesitated to exploit it, totally disinterested in the human cost. He has no faith of his own, certainly—a religious zealot could be understood, while still condemned. Hopkins is far worse, though—a man draping himself in the veneer of religion solely to commit atrocities in a way sanctioned by society.

To American audiences in particular, Witchfinder General likely seemed oddly familiar upon arrival in 1968. From 1960-1964, Price had starred in a series of eight horror films from Roger Corman and AIP, based on the works of Edgar Allen Poe … well, loosely based on them, anyway. It’s unsurprising, then, that AIP wished to evoke that same Poe series for Witchfinder General despite the lack of Corman’s involvement or anything in the story being related to Poe in the slightest. The film was thus retitled Matthew Hopkins: Conqueror Worm in the U.S.—a connection tenuous in the extreme, but somehow fitting for such a slimy, odious character. If anyone deserves that title, it’s Matthew Hopkins.