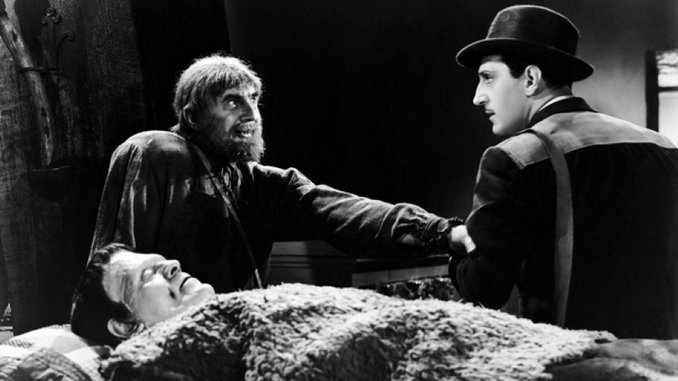 Film fans tend to associate the 1930s fairly strongly with the original run of Universal Studios’ monster movies, which included such foundational classics as Dracula, Frankenstein, The Mummy and The Invisible Man between 1931-1933. Less understood to the average film fan is the way that the horror genre actually dropped completely off the map in the back half of the decade, going from Universal’s bread and butter to practically nonexistent by 1936. The genre needed a savior, and that film ended up being 1939’s Son of Frankenstein. The third film in Universal’s original Frankenstein series, it’s one of the greatest hidden gems of horror cinema in the 1930s—beloved by historical horror geeks, but almost completely unknown to more casual viewers, especially in comparison with first sequel Bride of Frankenstein from 1935. Allow us to set the record straight: Son of Frankenstein is every bit the film of Bride, and in some ways it’s even better.

So what happened to horror in the back half of the 1930s? Well, the short answer is that there is no short answer—there were a lot of factors at play, which we covered more extensively in this essay about the two weakest eras for the horror genre in world film. But suffice to say, the sudden enforcement of the Motion Picture Production Code didn’t help things; nor did a change of ownership at Universal or the perception that the horror boom of the early part of the decade had been a “fad” without any real staying power. Horror subsequently withered on the vine, with almost no representation in 1936-1938, before a Hollywood theater owner managed to reignite public interest with an extremely successful double bill of Dracula and Frankenstein. Universal quickly took notice, re-releasing its original two horror franchises to great acclaim in 1938, which spurred the development of new horror material for 1939. Enter, Son of Frankenstein.

Perhaps as a result of the empty period that preceded it, Son of Frankenstein feels a bit like a “greatest hits” reel of everything that came in the decade before, harvesting those elements that worked best in films like Bride of Fankenstein and Dracula while also making lasting contributions of its own that would persist through the history of the series. The original Dr. Frankenstein (Henry Frankenstein, in Universal’s version) is out of the story, replaced by the titular son Wolf Frankenstein (a debuting Basil Rathbone), a man attempting to redeem his father’s wicked reputation. Ah, but will he be able to resist the temptation to play God that runs through the Frankenstein family tree, when he rediscovers the dormant monster, once again played with great empathy by Boris Karloff? And what kind of agenda does the hunchbacked Ygor (Bela Lugosi, at his best) have for the good doctor and the lumbering creature?

If you’re looking at that premise and thinking that it sounds awfully familiar to Mel Brooks’ Young Frankenstein, you would be correct—although Brooks’ film is a parody of the entire Frankenstein series and indeed the old Universal Horror motifs in general, it borrows from no one film half as much as it does from Son of Frankenstein. Indeed, characters like the one-armed Inspector Krogh (Lionel Atwill) make their debut here and add immeasurably to the spooky feel, circumventing the Production Code’s limits on depicting on-screen violence by instead showing us the results of past violence—there’s few things in this era of Universal horror more chilling than Krogh describing how he was crippled as a child when he encountered the monster and subsequently had his arm “ripped out by the roots.”

So too does Son of Frankenstein benefit from a relatively large budget, which results in lavish, opulent sets and impressive laboratory setpieces. It was the final “A” film in Universal’s horror series before the movies became more budget-conscious throughout the 1940s, and it shows with a sense of grandeur and lavishness that later entries such as Ghost of Frankenstein can’t begin to replicate. The performers, meanwhile, rise to the level of the the production around them—Rathbone is dignified and eventually seduced as the titular doctor, while Lugosi steals the show as Ygor, a despicable puppetmaster who may or may not be undead, having apparently survived hanging and a broken neck. It’s his quest for revenge that sets the “horror” portion of Son of Frankenstein into motion, and Lugosi is never a more perfect archfiend than he is here.

Perhaps the only knock on Son of Frankenstein—beyond some truly irritating child acting, which is part and parcel for the era—is that it regresses the character of The Creature himself, stripping him of the power of speech and cognizance he learned by the end of Bride of Frankenstein and to some degree returning the character to his roots from the first Frankenstein film. This is explained away as a result of the monster’s injuries and long period of stasis, but Karloff still makes the best of the situation, giving The Creature his usual combination of menace and pathos. You might say that after a first sequel that pivoted in the direction of shining a spotlight directly on the monster, Son of Frankenstein is again more interested in the man to actually bear the “Frankenstein” name, and how ambition and curiosity can destroy even those with the best of intentions. In that way, this film even anticipates the Frankenstein stories to come, and the evolution of the doctor to a conniving anti-hero played by Peter Cushing during Hammer’s Frankenstein revival series in the 1950s and 1960s.

Despite the lower profile of Karloff, however, Son of Frankenstein is a feast for the eyes, being perhaps the most attractive horror film of Universal’s original monster movie cycle, and with some outstanding performances to boot. It deserves to be mentioned in the same breath as Bride of Frankenstein, and is an iconic example of Universal horror at the peak of its power and potency.