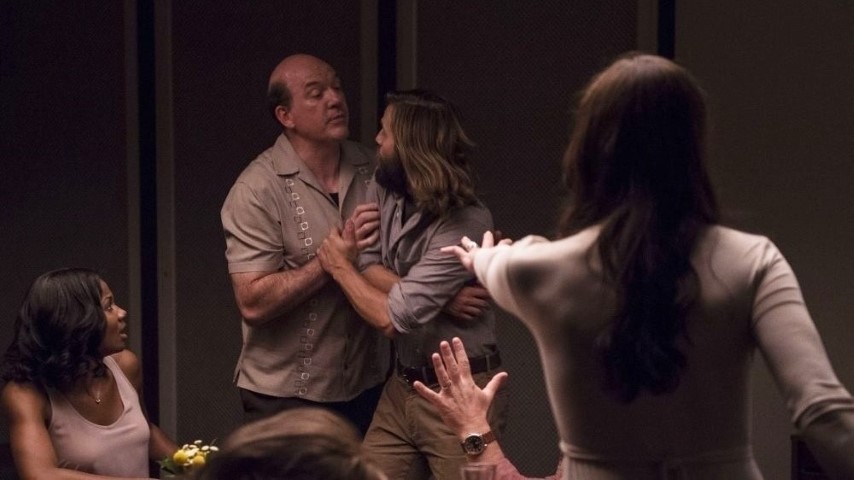 The weaponization of social mores is a theme in horror cinema that isn’t really explored as often as it might be. After all, if our year of living through the pandemic has shown us anything, it’s that American society is highly vulnerable to attacks that take advantage of our tendency to militantly defend anything we can justify as personal freedom or privacy. Where else do thousands die because people see free access to haircuts and movie theaters as unalienable rights? Where else are raving conspiracy theorists defended en masse by those who insist that every viewpoint is equally valid, regardless of whether it’s based in reality?

The Invitation is a film about living in that kind of society, just as surely as it’s also a film about the crushing, transformational power of grief to send human beings searching for emotional salves in illogical places. Director Karyn Kusama’s 2015 thriller is an exquisite slow-burn story that feels ultra modern in setting and philosophy—a biting critique of those who retort with “well, we don’t know all the facts” when something obviously unsettling is happening right under their noses. It’s an indictment of anyone who has ever sat by the wayside and watched a disaster unfold, because it “wouldn’t be their place” to step up and intervene.

Logan Marshall-Green plays Will, a man buckling under the weight of a failed marriage that ended after the accidental death of the pair’s young son. Together with his new girlfriend, Will responds to a dinner party invitation from ex-wife Eden (Tammy Blanchard), agreeing to return to the home he once shared with his family. We get the sense that this is out of some sense of obligation—perhaps people have told him that he needs to normalize the relationship with his ex wife, to clear the air so mutual friends can feel less awkward interacting with them. But from the moment Will arrives and is greeted by Eve’s amiable new husband David (Michiel Huisman), his insecurities and suspicions begin bubbling to the surface. Why invite him at all, to such an emotionally charged gathering? What’s with the weird “support group” that Eve and David keep mentioning having met in? And who’s this odd young woman living at the house? The questions pile up, and so does the tension, reaching levels of intensity not typically seen in the first 30 minutes of any Hollywood thriller.

It quickly becomes clear where this is going—something sinister seems to be afoot, and only Will can see it, while the rest of the guests are inherently predisposed to think of him as the bitter former husband teetering on the edge of a nervous breakdown. But The Invitation doesn’t dare make things that easy on the viewer, nor can we ever really be sure if we can trust Will as our de facto viewpoint character and audience proxy. What do you make of a man who prowls around his ex-wife’s home, rummaging through cabinets out of some seeming compulsion to find something to justify his suspicions? Should we really identify with the anxiety wracked and bitter father, rather than a mother who is processing her grief in a much more active (if kooky) way? Is it worse to cast the first stone at an innocent man, or ignore offenses out of a feeling that you’re beholden to a certain expectation of performative, “civilized” politeness?

Kusama has described The Invitation as “a metaphor for what the nightmare of anxiety really is, which is this irrational sense that people are trying to hurt you somehow.” That irrational fear is capable of sabotaging relationships where genuinely empathetic people want to do their best to help, but that same fight-or-flight instinct is simultaneously what primitive man trusted in to keep him safe. It provides the film with a constant, unbearable tug of war, building to the cathartic conclusion that you surely hoped was coming. It’s a masterpiece of confident, patient suspense.

The ensemble cast all carry their weight, from Lindsay Burdge as the off-kilter houseguest Sadie, to a brief appearance by Toby Huss as the enigmatic “grief counselor” Dr. Joseph. But special recognition belongs, as it often does, to character actor John Carroll Lynch as Pruitt, an unexpected guest of the evening who shares deeply—and uncomfortably—of his own experiences with grief and guilt, attracting some guests and repulsing others. Lynch is a masterful horror performer, and here he’s channeling some of the same combination of everyman affability and quiet rage you could detect just under the surface of the lead suspect he also portrayed in David Fincher’s Zodiac. He has a combination of pedestrian harmlessness and the capacity for brutality that few other actors have ever explored so brilliantly.

The Invitation is one of director Kusama’s most elegantly crafted works to date, and it should be remembered in years to come as one of the most effectively unnerving and expertly paced thrillers of the 2010s. At the very least, you’ll probably look a bit more quizzically at your friend or neighbor’s dinner party invitation afterward.