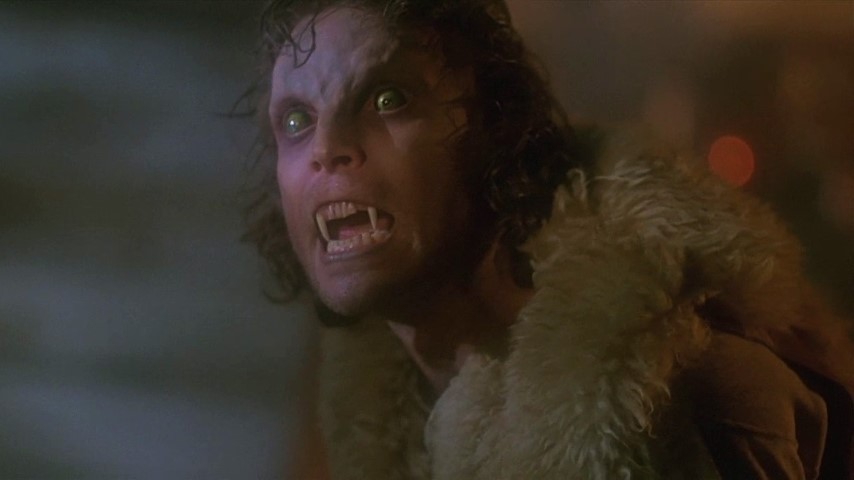 There’s a few major ways you can make a werewolf movie. In what is likely the most dominant form, our protagonist is a sympathetic figure who survives an early brush with a savage beast, only to find that their own animal instincts are steadily being awoken in the build-up to a terrifying, kafkaesque transformation. This archetype describes everything from Universal’s original The Wolf Man, to John Landis’ An American Werewolf in London or the MTV-era high school puberty parody of Ginger Snaps. These are films about identity and repression; about the darkness within mankind; about a simultaneous loss of control and the discovery of a certain disturbing freedom within primeval savagery.

And then there’s the other kind of werewolf movie—the “creature feature” kind where hordes of rampaging beast men descend on our hapless heroes and tear the majority of them to bits, without really bothering to get caught up in the whole “moping of a doomed protagonist as he tries to resist the call of the wild” thing. We’re talking Dog Soldiers-type werewolf movies, here. And in that leaner, perhaps less ambitious mold, there are few films that ever did it better than The Howling. By the way, go ahead and check out our list of the 25 best werewolf movies of all time.

It’s a Joe Dante feature, of course—the Joe Dante of Piranha more than the Joe Dante of Gremlins, just a hungry young Hollywood talent with an eagerness to splash blood around and live up to the “thrills and profit” playbook of patron saint Roger Corman, who makes an immediate cameo in the film’s first few minutes. At a time when the nascent slasher genre was booming, The Howling feels very much like Dante’s overture to the same market. It’s a slick, no-fuss werewolf thriller that never skimps on what it’s decided the audience would want to see.

In fact, the sheer visibility of how The Howling sticks its creatures front and center, minimizing any real sense of mystery inherent to “The Colony,” is one of the things that particularly sticks out as unusual when revisiting this film in 2020. There’s very little subtlety, in fact—the film grounds you in the concrete reality of the situation within the first third, when a serial killer’s apartment is investigated and it’s filled from top to bottom with the killer’s drawings of literal wolf people. Naturally, the film’s characters start asking questions about werewolves, because really, how could they not?

The Howling similarly plays fast and loose with anything you might consider to be established werewolf “lore,” retaining some of the traditions such as silver bullets but completely dispensing with others. The full moon? Unrelated to this particular condition. Nighttime rampages? These creatures can transform at will, day or night. Hell, they can even return from what sure as hell appears to be death, if you don’t kill them right. Rarely has being a werewolf looked like more of a power trip and less of a burden, unless you’re stuck being the one dealing with an extra crotchety John Carradine, who would sadly pass away within a year of the film’s release.

The practical effects, meanwhile, undoubtedly rank among the best that the era has to offer, giving the lauded Rick Baker makeup of the same year’s An American Werewolf in London a run for their money. These transformations come courtesy of the work of Rob Bottin, of The Thing fame, and indeed they might remind one of poor, unfortunate Palmer in that film as his face melts and an alien lifeform bubbles up from within. The biggest difference is actually narrative context rather than the visual spell these effects cast, as the iconic transformation of American Werewolf still edges this one out for the fact that it benefits from the horror of an unaware protagonist who is suffering through something he doesn’t understand, rather than a protagonist who is standing frozen in place, watching as the man menacing her undergoes a (very long) transformation. That’s indicative perhaps of John Landis’ greater strength as a storyteller, but from a purely lizard brain perspective there’s nothing in American Werewolf quite as gnarly as the sequence in The Howling where a severed werewolf fist slowly and gruesomely transforms back into a butchered human hand. That long, icky shot is the very essence of what sets the film apart from both American Werewolf and the urban dreaminess of Wolfen, which together form the holy triumvirate of 1981 werewolf cinema.

The Howling would be followed by all manner of lesser and stranger sequels, from the gratuitous Sybil Danning erotica of Howling II: Your Sister is a Werewolf to less inspired and ever cheaper entries throughout the 1990s and even the 2010s via 2011’s The Howling: Reborn. It was a perfectly fitting trajectory for a series with such a well-defined and humble intent—the likes of American Werewolf or Wolfen were never franchise material, while The Howling’s slasher-esque ethos meant it was always destined for serialization and a descent into the ever more niche waters of direct-to-video horror, where the the most dedicated horror geeks were already waiting to form a new colony.

That colony lives on to this day, almost 40 years after the original, awaiting the next chapter of this throat-ripping saga of lycanthropy and bared breasts. And indeed, it will be here sooner rather than later: It director Andy Muschietti is reportedly working on a remake of Dante’s original for Netflix, arrival date unknown. Can the shameless horror gratuity of The Howling survive a jump to a new, high-profile streaming home? Well, as long as there’s still animated werewolf sex, we should be okay.