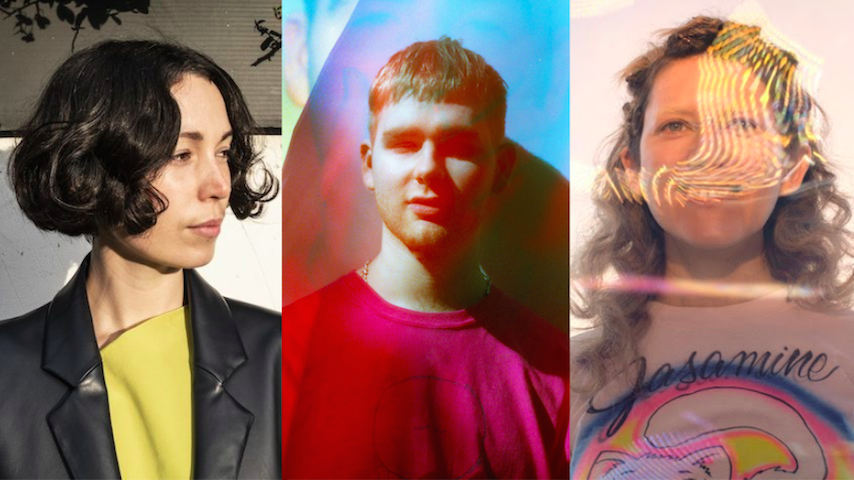 Genre intersections make musical possibilities seem endless. Some are particularly jarring, some are obvious and relatively common and some may even open your ears to a type of music you wouldn’t have sought out otherwise. When Sweet Trip’s dreamy IDM album You Will Never Know Why was reissued earlier this year by Darla Records, it made me think about how many great electronic dream pop albums came out this year. Kelly Lee Owens blended techno and dream pop on Inner Song, No Joy mixed trip-hop with shoegaze on Motherhood and so on. Here are eight great albums from 2020 that embrace electronic and dream pop traditions.

Though they’ve dabbled in electronics before, The Bilinda Butchers have largely focused on mellow dream pop stylings since they started releasing music in 2009. That is, until they released their third album and first in six years. Night and Blur is still grounded in melodic songwriting and layered vocals, but it folds in trip-hop and drum and bass influences (think late Everything But the Girl albums) for a more stark sound. Despite the occasional, spastic jungle beats, it’s a largely pacifying album, one that sounds like a lonely nighttime drive, littered with lively, colorful sights, but also masked by a melancholy murk. Gen Z are streaming a lot of poignant, slightly offbeat pop with electronic elements these days, and The Bilinda Butchers operate in that framework in a much more varied, interesting way. —Lizzie Manno

James Young and Aiden Whalley have been making various types of U.K. electronic music as Darkstar for over a decade now. What started off as an inventive dubstep project turned into a politically-minded electro-pop band, particularly on their previous full-length Foam Island and their 2016 EP Made To Measure. After a four-year break, they returned with a new LP Civic Jams, an album that mixes club beats with windy vocals—it’s a bit too sad and minimalistic to dance to, but also too rhythm-centric to avoid at least nodding along. Thrumming, stylish synths and Whalley’s enveloping echoes make “Jam” an undeniable highlight, while floaty, compassionate tracks like “30” and “Loon” find the group inching into R&B and dream pop soundscapes. —Lizzie Manno

Though billed as a debut album under their new moniker Drab City, Good Songs For Bad People is actually the sophomore offering by Berlin-based multi-instrumentalist/producers Islamiq Grrrls and oOoOO. The first time around, upon the independent release of Faminine Mystique in 2018, the pair proclaimed their intentions with an accompanying manifesto that, among other things, decried the soul-deadening commodification of art. And with its woozy, off-kilter blend of electronic production, smooth jazz and repurposed musical flotsam like hair metal guitar solos and one-hit pop, Faminine Mystique unfolded like an hour-long dare to artists and listeners alike, a subdued but impassioned call for us to wake up from the stupor of consumerism and re-align with the true purpose of creativity. Needless to say, Good Songs For Bad People, their Bella Union debut, arrives amid drastically different circumstances. This time around, oOoOO (electronic producer Chris Dexter Greenspan) and Islamiq Grrrls (who goes simply by Asia) restrain their appetite for experimentation in favor of a seemingly straightforward take on retro psychedelic pop with electronic underpinnings. When the soft strains of the first proper song, “Working for the Men,” materialize into the frame alongside Asia’s ghostly voice, it’s abundantly clear that Drab City aren’t shying away from straightforward beauty this time. —Saby Reyes-Kulkarni

Australian artist Katie Dey has a knack for mystifying listeners. Her early records, like 2015’s Asdfasdf and 2016’s Flood Network, touted muddied vocals and wildly busy synths—sometimes pretty grating, other times just challenging. With her fourth and latest album mydata, Dey decided to streamline her experimental pop clamor, offering slightly more tuneful vocals to accompany the dizzying instrumentals. Her lyrics articulate romantic feelings in this extremely online age, and they’re as touching as they are a cry for help: “I want love / I’m not above it / No denying anymore / I want love for you too…La la la anyway just a thought / I’m embarrassed ignore me.” Her manipulated vocals are perfect for conveying these themes—there’s palpable yearning but also an element of dystopian, disconnected doom. —Lizzie Manno

Dream pop and techno might be vastly different genres, but they share a common goal. Where dream pop’s glimmering, reverb-soaked guitars and keyboards entrance listeners into a listless stupor, techno’s clattering 808s and simple, repetitive rhythms keep the party going. While these modi operandi at first seem diametrically opposed, a closer look reveals that both genres impart enchantment, nirvana, hypnosis and even healing—a night out at the rave is as palliating as an evening splayed out listening to Teen Dream. Welsh songwriter-producer Kelly Lee Owens understands these genres’ powerful overlap more than any other musician in recent memory. With her sophomore album Inner Song, however, Owens potentially opens herself to a much wider audience. A thrilling, dynamic LP that overflows with life, Inner Song is full of dancefloor devotionals that easily rank among her most accessible creations to date. If Kelly Lee Owens gently opened the door between dream pop and techno, Inner Song rushes through it and builds a world where ecstatic, curative, untethered electronic sounds abound. —Max Freedman

On The Visionary, Jack Milwaukee (aka M!R!M) makes dark synth-pop and post-punk that’s infinitely more interesting and luxuriant than his contemporaries—even if his reference points are similar. Between the lush, oddball glimmer of “Superstitions” or the synthetic, muffled vocals and melancholy saxophone on “Survive,” this is an album that thrives on textures, but not obvious ones. Some recall gorgeously decadent ’80s sounds, but others sound weird enough to come from a PC Music record. One particular moment of dense glory arrives when his unpredictable, winding textures and heavily-delayed vocals meet a heady swell of violin on “Crucifix And Roses”—if we’re not met by similarly joyous sounds at the pearly gates, consider us disappointed. —Lizzie Manno

The U.K. has a great tradition of albums about youth. Acts like Buzzcocks, The Smiths, Arctic Monkeys and others released full-lengths that became eternally programmed into teenagers’ heads as soon as they rushed home from the record store. And Britain also has a robust electronic music history, too: Artists like The Chemical Brothers, Pet Shop Boys and Aphex Twin have inspired listeners across several generations, and they’re all still touring and making music. Enter Alex Crossan, the 23-year-old musician and producer behind Mura Masa whose 2017 self-titled debut LP was nominated for Best Dance/Electronic Album at the Grammy Awards. His first album featured appearances from A$AP Rocky, Charli XCX, Christine and the Queens, Damon Albarn and more—pretty impressive for a baby-faced musician’s first solo album. R.Y.C (which stands for Raw Youth Collage) is meant to evoke the general and specific chaos of modern day youth, and per NME, he found musical inspiration from some of the fresh British faces that are shaking things up: slowthai, Squid, Stomrzy and black midi. If his debut showcased Britain’s more exotic sounds, then his second album taps into the country’s urgent newcomers. However, the escapism that pervaded his debut is still here, albeit packaged in a grittier, less heady way. —Lizzie Manno

If No Joy’s latest album is a storm, there’s a clear ethos in its eye. In writing and recording the music that would become the band’s first new full-length in five years, frontperson and principal songwriter Jasamine White-Gluz made a conscious effort to emphasize unconventionality, refusing to place limitations on her creative process.
Motherhood is defined by its refusal to compromise—presented with any choice, the album seems to answer, “Why not both?” The result is a creative tornado that sweeps up everything from bongos and trip-hop to slap bass and a broken clarinet, cohering somehow into a set of songs that gives the listener as much as it demands of them. It’s a testament to the power of creativity, intertwined with an emotionally complex contemplation on the act of human creation. That it’s No Joy’s most ambitious album yet, as Paste pointed out in highlighting Motherhood as one of August’s most exciting releases, is not up for debate; that it’s their best is not much more of a discussion. —Scott Russell