10 Indie Albums For Your Running Playlist 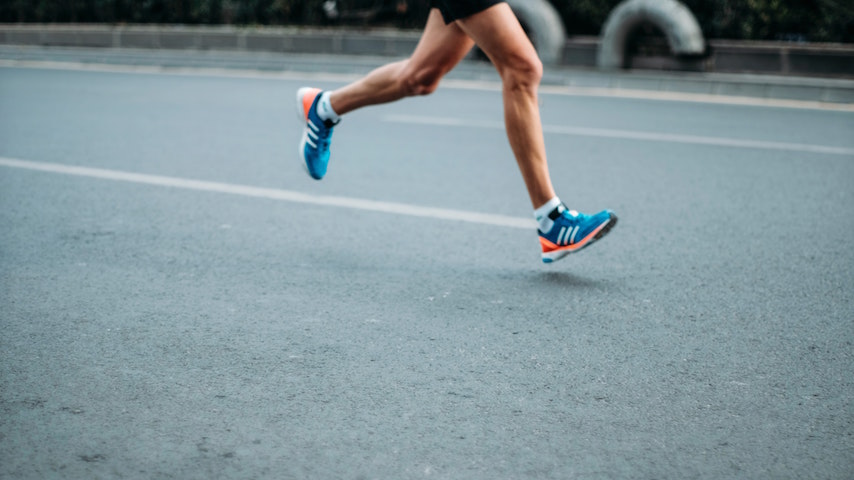 Back in mid-March, around the beginning of that most intense period of quarantine, I started running again. My gym closed, the pantry bloomed with stay-at-home stress snacks and it became clear I needed to find a new way to exercise. The answer was so simple (or so I thought!): Just start running! I had been a casual jogger in days past but never an athlete. This time, however, I began training nearly every day for a half marathon, and it has been both fun (fresh air, endorphins, sunshine!) and extraordinarily difficult (janky toenails, lack of motivation, exhaustion, etc.). One thing that has helped me stick to my training schedule? Music. For at least a short period of time every day, I’m allotted an undistracted, extended moment with an album, playlist or podcast of my choice. More often than not, I choose a massive Spotify playlist stacked with old garbage: trashy 2000s club hits, songs I found on TikTok and the occasional show tune. But when I really focus on a full album, it’s always glorious. However, finding a good running album is tricky business. You need something that isn’t too long or slow with adequate peaks and pacing. It’s even harder to find an “indie” album to run to. However, I have gathered several such albums in my arsenal over the last six months, so I thought I’d share them with you. Here are 10 indie pop, rock and electronica records that are sure to keep you moving for however many miles you want to go.

Quick-paced indie rock is the perfect soundtrack for a short jog around the neighborhood. One of the tightest indie-rock debuts of the last few years was New Zealand rock band The Beths’ 2018 LP Future Me Hates Me, and it’s an especially urgent little album with a great pace for running (even though there’s literally a song on the record called “Not Running”—skip this song if necessary!). The album title itself is motivation for physical transformation: “Future Me Hates Me.” Do your future self a favor and keep moving. The charging “ooo-ooo-ooos” of “Uptown Girl” should help with speed,” while the twinkling “Little Death” is a great moment to take a breather (until the chorus, that is!).

Listening to Caroline Polachek’s PANG is like entering your favorite fantasy novel—it’s a whole different world. And what better time to escape reality than a long, cleansing run? It’s almost as if Polachek, formerly of indie-pop duo Chairlift, designed her solo debut for budding runners. It’s slow to start (warmup), steady in the middle and decadent in the end (recovery). “So Hot You’re Hurting My Feelings,” the album’s highlight and a key single from the release that shares a haunted feeling of heartbreak with songs like Robyn’s “Dancing On My Own,” is an apt addition to any running playlist, even if the full album isn’t for you.

I debated which Caroline Rose album to include on this particular list, because the Austin, Texas-based artist is pretty much an expert in music to move to. The sharp indie-pop of her 2018 album LONER would make for fine company on your next treadmill run or stationary bike ride, but there’s something freer about her recently released album Superstar, which we named one of the best indie rock albums of 2020 so far. “Got To Go My Own Way” will send you sprinting off-path into uncharted territory, “Feel The Way I Want” will help you to settle into a pace that’s comfortable for you and embrace whatever feelings float through your mind meanwhile and “Someone New” will send you into a synth-fueled daze.

Yes you do run. Though its title implies otherwise, the Spanish quartet’s sophomore album is not the soundtrack to a couch potato’s weekend. I Don’t Run is energetic, punchy rock ’n’ roll, a break from the lo-fi tendencies on Hinds’ full-length debut, Leave Me Alone. Singers/guitarists Ana Perrote and Carlotta Cosials practically spit out the lyrics to “Finally Floating,” a jubilant song about sleeping that’ll have you doing anything but.

Future Islands fans probably clicked on this list already knowing The Far Field would appear here. Few indie rock stalwarts have as fast-paced, clean and coordinated a catalogue as Baltimore’s Future Islands. Frontman Samuel T. Herring’s growls are like a very persistent training coach, and the calculated synths, drum machines and electronic beats make for absolutely stellar running music. The Far Field is one of the band’s best albums. “Beauty of The Road” will help you to appreciate the journey, “North Star” will inspire you to keep your eyes on the prize and “Ran” will remind you why you run in the first place.

They’re not exactly “indie” any more, but they once were! L.A. rockers Local Natives have been chasing adult alternative success for a few years now, but they still have a few golden indie rock records in their catalogue, including 2016’s Sunlit Youth. Just the name makes me want to hit the pavement during a 70-degree day and run ‘till I can’t I no mo’. Sunlit Youth has a great pace from start to finish, but a few high points in the tracklist include the soaring “Past Lives,” the jumpy “Dark Days” (which features Sylvan Esso—another electronic-minded indie pop group with great running albums to spare!) and the slow-ride of “Coins” (a great time for a breather).

The best songs in a running playlist are the ones that flicker on and light you up, inspiring you to go faster, and St. Vincent’s “Cruel” is a real get-up-and-go kind of track. “Cruel” crawls at the start, but as soon as the hypnotic beats and Annie Clark’s snazzy guitar kick up, it morphs into a run-ready anthem. “And they were a zephyr, blowing past ya/ Blowing fastly so they can see ya,” Clark sings. Make like that zephyr and get going. The dense fuzz and steady thumps of “Northern Lights” are equally motivational, and the album’s kicker, “Year of the Tiger” is a good time to slow your pace for a cool-down.

Tennis’ excellent pop song “Needle And A Knife” begins with the lyrics, “She works hard / she does it all without complaining.” If only I could take on all my runs with such a great attitude! But the reality is that some runs will suck. For those gloomy, groggy days, you’ll want to have a Tennis album blaring from your headphones. The married indie-pop duo of Alaina Moore and Patrick Riley are experts in euphoric, catchy indie music, and their 2014 album Ritual In Repeat (while one of many excellent records in their discography) is positively radiant—perfect for an early-morning 5K.

I’m finding that the music I need most right now falls into one of two categories: Nostalgia (we’re talking anything pre-2020 that takes me back to louder, busier, less-quarantined times!) or something brand spankin’ new, preferably a newborn that’s also danceable. Canadian indie-pop group TOPS’ newest album I Feel Alive arrived just recently in April—PLUS it’s a prime soundtrack for taking a dance break in your kitchen or going on one of those quick daily jogs/walks we’re all doing now to get fresh air—so it definitely falls into the latter camp. While I Feel Alive may not hit home as rapidly as some of their earlier releases (The tracklist of 2017’s Sugar at the Gate is a toppling of bops), it really feels like they’re more comfortable in their own skin here. The singles (particularly “Direct Sunlight” and the title track) are some of the best, grooviest tunes on the album, but the entire 35 minutes will have you bouncing around the room/road, dancing for no one but your cat or partner who’s begging you not to play the same album again (If it’s this record on repeat, too bad for them!). This music is comparable to another indie-pop outfit on this list, Tennis, full of retro angles and disco-inspired breakdowns, as well as a few dreamy synth-pop moments, but TOPS are doing their own stylish thing entirely. If you need an album to move to (or just feel something to), look no further than this 2020 bloom.

Ruban Nielson’s hypnotic tale of a love triangle gone amiss makes for urgent running fare. The title track is such a fun listen it could act as its own running playlist on loop, but the album only grows in groove and amusement as it stretches on. The Latin flair and biting social critique on “Can’t Keep Checking My Phone” will aid you in remaining distraction-free on your next trot, and the experimental funk of “The World Is Crowded” will keep you company. Multi-Love is a tremendously entertaining tale that’s just lengthy enough to get your blood pumping. Queue up Unknown Mortal Orchestra’s Sex & Food while you recover.